("Take N", because I've had the good fortune to sing it several times.)

As I have said before, more than once, when talking about music:

(This is an open goal for musicologists – my theoretical knowledge of music is minimal. Please comment if this needs another update.)

When I first discussed Bach's St John Passion here I recalled many hours standing listening to the Passion story during mass;  it was standing room only in churches around Easter  (in the One True Chorch, that is):


... on Palm Sunday and on Good Friday ([ed. there were] dramatized readings on that day, to the extent of having separate voices for the Evangelist, Jesus, Pilate, Peter et al., but without Bach's extraordinary music).

Later in the same post I mentioned this pelagic pun:
Beethoven's pun ...

I am reminded of a venial sin of mine, which I feel the need to confess. At a quiz held by my choir a few years ago, this pun was background to a question about the meaning of Bach. At the time, I didn't know; but I guessed that there might be some link between the consonants in the two languages (German and English). I scrawled my guess: book. My reputation as someone who sometimes knows stuff about language may have influenced the marker on the neighbouring table  – assuming that I'd got it right because it was the sort of thing I get right,

The situation was quite competitive, and I accepted the ill-gotten point. (Stupid really. We didn't win – divine retribution, no doubt.)

...came to mind as I listened to the recit before Peter's Ach, mein Sinn, with its excruciating chromatic keening – a mixture of grief, fear, and self-pity. Not long afterwards the dramatic writing is no less oceanic when the veil of the Temple is rent 'from top to bottom' [cascade of  little black notes] and 'the earth did quake' [another three bars of frenetic black notes], until an uneasy peace is restored when 'many bodies of saints arose'
.
(Ed: My memory here was at fault. Ach mein Sinn isn't sung by Peter; it's a reflection sung by an unnamed tenor after Peter's denial.)

Anyway, the St John Passion is uppermost in my mind at the moment, because of my choir's forthcoming concert (oo-er, on Sunday week): 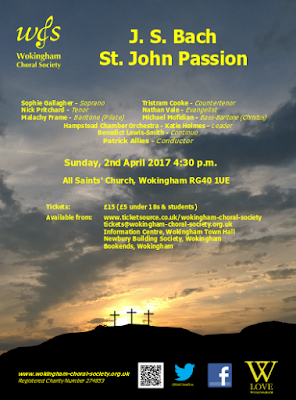 In my subject line, both here and on the occasion of my Cambridge rendition , I said Johannes-Passion. This isn't because of snobbery (though elitism does come into it – so bite me, as I believe they say in some parts of the world). It's because the German is part of the music.

There are, in the piece, two choruses with more-or-less identical settings. But what is matched is not just the notes. In one the mocking words are

In the other, the corresponding words are

The last two words are (trivially, of course) a perfect match, but consider the vowel sounds in the first three syllables: two are identical (Sei/schrei-, ge-/-be) and the third is similar: nicht has a front vowel and grüßet has a vowel that, though not strictly a front vowel, is fronted (the lips are forward); the same applies to König. All the stressed vowels are either front, or fronted,  or in the case of the first diphthong the tongue position is moving forwards (from [a] to [ɪ])

The first version, which I sang (in  English) with a previous choir about 30 years ago, had "Write thou not..." for Schreibe nicht... The first syllable is a close match; not so the others. My present edition has both German and English and goes for a strangled and outlandish version: "Write Him not as our king of the Jews"; how glad I am that we're not singing that... :-)

There's more to be said, but tempus is fugendum (or whatever). My point is that the original language adds to the drama of the original, forcing facial antics in the singers to indicate mockery/anger/hatred... as appropriate. And the sounds are part of the musical picture.

PPS
The last paragraph of this Guardian piece I've just seen reminded me of the point I made in my PS:


As part of a multilingual family, Konkolewska said she finds that subtle differences in meaning for the same word in different languages are important – and useful. “My favourite English word is ‘flabbergasted’ – I love this feeling, but I can only feel it in English because it doesn’t exist in Polish,” she said.

“My Lithuanian partner says that when he’s moderately angry, he can be ‘angry’ in English, but when he’s really angry, he’s ‘piktas’ in Lithuanian because, in his opinion, the accent and pronunciation of the Lithuanian word carries much more anger than saying it in English.”

Some languages are a better fit for some emotions, and many composers – knowingly or not – exploit this (and translations can only try to make up the deficit).