What a mess. I blame Cameron for kowtowing to the hate-filled pseudo-politics of Little Englanders. Hate-filled...


<phonological_digression>
In my youth, hateful meant the first of these two definitions (from the Collins Dictionary of English): 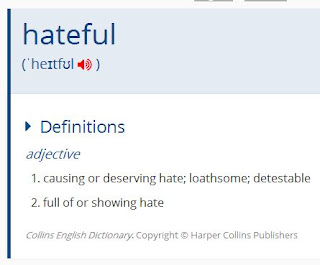 I wonder if, in a country full of speakers of English as a second language, this anomalous definition (as opposed to the many -ful words that have a clear sense of filled-with-<noun>, like careful) the word was readily confused with the very similar-sounding hate-filled  [especially if, as is often the case, the /d/ is not fully released]). Not, of course – I suppose I still have to make this clear (although I keep making the same point) – that I'm saying the newer sense is wrong.
</phonological_digression>

Examples of hate-able-ness
For pity's sake, these are PEOPLE we're talking about. In the words of Sky Masterson. Let's keep the party polite.

That was then. As I write, in the first 4.5(-ish – as I have said before. these stats are based on an Internet-day, based [presumably] on some arbitrary stretch of 24 hours: maybe PST) days of November, daily visits are averaging about 110 per day. So that growth over the last year (to August 2016) was fairly flat at just over 16,000; until the most recent quarter, when it was just short of 20.000. [Update: Just before midnight UTC on  5 November it was well over 120 per day.] 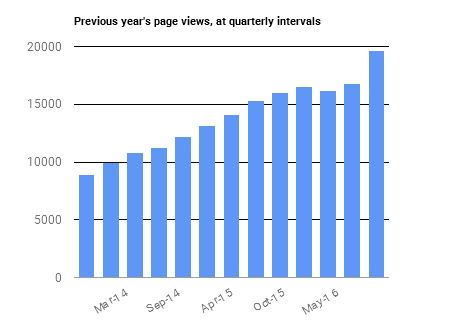 PPS: Another update: Novembers uptick is continuing; nel mezzo del cammin di nostro Adventu, as Good Ol' Mr terza rima himself might have put it, December's well on the way to matching November. But I have promises to keep etc, learning words for Saturday week. 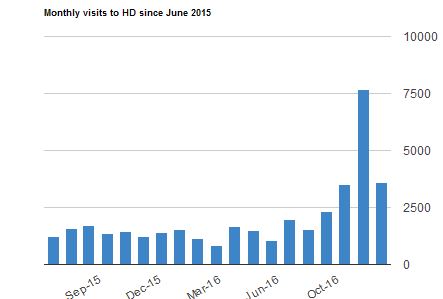 In the last fortnight the blog has gone from cliché to cliché. In the last 3 months there have been nearly 19 thousand  page views; and there are several more blogging days left before the month's end. In the previous 12 months there were just over 17½ thousand. An update to the graph is left as an exercise for the reader.
Posted by @BobKLite at 12:54