For the last month or so, though no longer – as atrocities redefine atrocity and the word enormity reclaims its self respect – I couldn't hear the name Aleppo without recalling an early Richard Curtis sketch.


<autobiographical_note time_span="197607:197609" venue-"Edinburgh">
Like much (all?) Richard wrote at the time, it was a vehicle for Rowan Atkinson. That star of the Oxford Theatre Group one-man show (with a cast of 9) – mentioned here and, briefly,  in the update to this post – was a conductor in tails and white gloves and with a baton, conducting (in the hilarious sort of random juxtaposition, so typical of Oxbridge humour at the time) a rehearsal of a scene from Othello. The Moor was delivering the lines

"...that in Aleppo  once...
I took by the neck the smitten dog and circumcised him thus"


[I've underlined the two typoes for the benefit of bardophiles who may know the original and gloss over them.]

At this, the conductor tapped his lectern, frowned, and indicated that Othello should try again. Othello did, still with the words "smitten dog ...circumcised". The conductor stopped him again. [Repeat ad lib as long as the audience is laughing]. Eventually, Othello got the words right: "circumcisèd dog...smote".
</autobiographical_note>.

Now though I can hear the word Aleppo without that irrelevant memory popping its irreverent head over the PC parapet. Now it's the word siege. that distracts me momentarily from the horror. 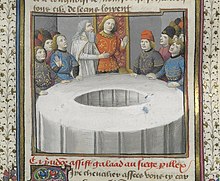 I discussed  chairs a while back, here, but said nothing about siege at the time. In Mallory's Morte d'Arthur the vacant seat at the Round Table was the siege perilous, and this was the earliest meaning: a chair. Etymonline says

Only then does the entry go on:


...The military sense is attested from c. 1300; the notion is of an army "sitting down" before a fortress.

That is to say, siege had been around for about a century with the meaning chair before it acquired its military sense. Sadly (considering the fate of the besieged) the military sense became the predominant one

But that "Vulgar Latin *sedicum" (and its more reputable Latin relatives) left many other traces, from courts in session to recording studios (with session musicians); in a less formal musical environment, a guest musician may sit in (and of course they don't just sit). In Portuguese, where Spanish has catedral (which Portuguese [Continental Portuguese, that is; to call my grasp of Brazilian Portuguese rudimentary would be a gross overestimate]  can also use, having many such pairs*), the word is sé (in Coimbra, in the summer of 1973 I used to catch the eléctrico at a stop called Sé Velha). The Holy See is a Santa Sé.


Of course, English too has see in this sense (that is, not just in the abstract sense of Holy See, but in the concrete sense of bishopric). Cathedrals, sees and all sorts of hierarchical seats...


<digression type="potential" status="LOOK IT UP">
When discussing hierarchies it's worth remembering what ἱερός  means.
</digression>

...form an all-enveloping web of words and meanings.

Back to Real Life...(at present I'm caught in the crossfire of two WSIWYG tools, which disagree about what constitutes well-formed HTML – aha, that's it, #headslap [different versions of HTML]!)

PS And here's a clue:
Feigning incapacity when malign reign gets the treatment. (11)

PPS The penultimate sentence in that Etymonline entry for siege ended ...from Latin sedere "sit" (see sedentary). The entry for settle (the noun) ends with the same cross-refernce:


That [PIE] root has many progeny.

PPPS – And here's another clue:

The answers: MALINGERING, GRIMALDI.
Posted by @BobKLite at 16:46