Is this a blip I see before me?

No big  news, but a quandary. From  time to time you may have noticed, I make an observation based on Blogger stats; and here's the latest. I have become accustomed over the years to see United States at the head of the Bleader Board. And that's where they still are (when you consider visits over the last year): 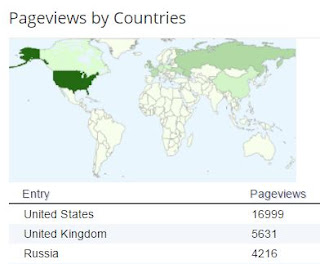 Russia accounts for less than ¼ of US visits – about 350 less per month. (Russia's absolute visits were closer to 100 per month.)

But over the  last  month (to nearly the end of May 2016) the picture is very different: 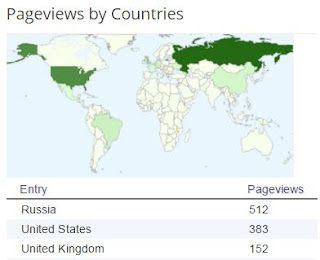 The US average has fallen from about 1400, while the Russian average has increased by a little over ½. (Of course, ignoring May, the increase has been much more,)

Of course a visit from an IP address that claims to come from Russia doesn't necessarily come from there; and the same applies – perhaps more so – to "US" addresses. Still, something seems to be going on.

A recent BBC TV programme (not that recent, but I first saw it last week – although that "first" needs qualifying) was Zoo Quest in Colour. It was based on the Zoo Quest programmes, made about 60 years ago and broadcast in black and white. Even in  an anachronistic world in which it had been broadcast in colour*,  we would have seen it in black and white, as my father had bought a TV only  to view the Coronation.

One of the later series, Zoo Quest for a Dragon was something I remembered seeing when I was 5 – remembered seeing through rose-tinted spectacles, one might think. But an explanation of the film making process ( in the first few minutes of that Zoo Quest in Colour programme) is crucial to an understanding of how the later programme came to be made; and to an understanding of how wrong that rose-tinted gibe would be.

David Attenborough couldn't have made the programme he wanted to make using the gargantuan 35mm cameras the BBC insisted on using. Attenborough wanted to use a small hand-held 16mm camera. The BBC Powers were hostile to the idea; the definition would not be up to the standard expected of the BBC. After what sounds like a heated discussion, the young Attenborough had his way. But the quid pro quo for his 16 mm camera, was that he should improve definition by using colour stock.

This decision had two consequences:
On our little set (14"? 12" Less?) I remember not being impressed by the dragon in that trapping scene; it just didn't compare with the ones in my Rupert Annual .


Thassall for this month. I have some serious weekending to do.

* This would have been impossible, as IMDB simply – and frustratingly – says "black and white". Having seen the TV programme "live", and failed to understand the deal between the BBC technical department and Attenborough (who could use a handheld camera on condition that he used colour film) , I looked to IMDB for an explanation. But there was none, so I just had to go back to iPlayer.