Last night on the BBC television news the newsreader – who was, incidentally, a woman, though this sort of slip is not in the immortal words of Wossname [one of the usual suspects in the field of iambic pentameters; Shakespeare...? Milton...?...] A malady most incident to maids'   – got her intonation wrong.

It was caused by a not very common (but still quite common) phrasal verb: rein in: this is pronounced with the dying fall on the ↘in. But the context was a piece about Magna Carta, with its associations with kingship. So reined became reigned in the mind of the auto-cue-writer-or-newsreader-no-names-no-packdrill.

And, as my last sentence cunningly showed ...

I have to admit I'm fairly pleased with this, although I did cheat a bit, by using reign as an object: in real life, 'reigned in' is a fairly rare occurrence, except in sentences like 'King John reigned in the 13th century' or 'Charles I reigned in an atmosphere of suspicion' or 'The young king's uncle reigned in his stead' or 'The pre-revolutionary kings reigned in complete oblivion...'.... Hmm. For 'fairly rare' read 'not uncommon'.

...when reigned is followed by in like this, the stress falls on the verb itself: '↘reigned in....'

Whereas what she meant to say was

I don't know whether she even noticed that what she had read out was meaningless. If she did, she hid it well. But there's a lesson to be learnt here: a speaker's  intonation affects the way listeners understand the message. In this case, it forces the listener to assume a different spelling.

If I remember aright, the single intonation curve on 'in the powers of the monarchy' (in the wrong reading) marks what is known to linguists as 'a phonological word'; but...

...my understanding of theoretical linguistics terminology is a good 40 years out of date at best, and at worst I may have got the wrong end of the stick.

If this sort of thing interests you, you could start here.

But there are nettles to be grasped – and not the figurative sort; I am thinking biocide in the vegetable patch. Though I am reminded (not clearly enough to remember the exact wording) of a politician on the radio last weekend talking about 'grasping the nettle by the horns' or 'taking the bull by the nettles'. I think the precise wording was better than either of those, but you get the gist.

PS On Tom, Dick, and Harry

... but it's striking how often examples adduced in Linguistics discussions tend to involve violence. The default passive-voice example, for ESOL teachers, is


The boy kicked the ball
rather than
Jane kissed John.

Anyway, the example I want to look at now –  to reflect on how intonation can radically affect meaning – is this, which I would attribute if I could.

Tom hit Dick and then Harry hit him.

On the face of it this might be a tale of righteous retribution taken on Tom by Harry's friend Dick:

But change the intonation, keeping the same words in the same order, and a rather darker tale of both Tom and Harry ganging up on Dick emerges: 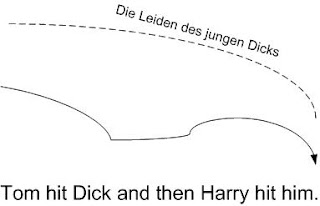 The first curve denotes Dick's suffering, but that suffering is not finished yet; the second curve starts a bit higher than the and but not as high as Tom  – Dick's travails are not finished yet, and the end of the intonation curve is lower than the first. There's an up-tick in the intonation to mark the pause between blows, but the general sense of the whole sentence is downward.

I have no idea (with my ESOL teacher's hat on) of how to teach this intonation; like most useful language skills it can only improve with exposure, practice, and if possible immersion.