This evoked a charming picture of competitive laundry between washerwomen on a riverbank. But it also led me to reflect on other words for arrive (Fr arriver, It arrivare... etc obviously derive from one root, Sp llegar Pg chegar... etc from another, while Provençal (predictably) has a foot in both camps with both arribá and plegar (I expect there's a story behind those differing inflexions, but there are things to do).


<digression>
Catalan often straddles the French/Spanish camps, so I expected a pair like the Provençal ones. But Cat. plegar has a different metaphorical use: stop work, knock off  – reminiscent of primary school teachers' instructions: When you've finished, FOLD your arms on the desk in front of you.
</digression>

While VENĪRE remained everywhere the usual verb for 'to come', two new terms conveying a more visual image were  borrowed from maritime language. The older of these, which prevailed in Spain, was PLĬCARE, first used with reference to the folding of sails (cf Port. chegar, Sicilian chicari). In Rumanian a pleca means inversely 'to go, to depart'; this is because the metaphor there was military, and referred to the folding up of tents  (cf. Eng. 'to decamp').  AD-RIPARE, 'to  come to shore', was a somewhat later creation which found favour in Gaul (cf Prov. arribá [HD: Elcock does not mention plegar here, but he has already mentioned it in another context]. From Provence it spread to Catalonia, and during the Middle Ages was carried thence to Sardinia, as arribare.

The Romance Language (I've given this source more than once, but make no apology for that: it's very good.)

Other nautical metaphors have found there their(!) way to the meaning arrive. My Subject line gives one; another, from a more  obviously nautical source, is to be heard in the sea shanty Fire Marengo:

I'll draw a veil over the other things he plans to do to Sally Brown, although it is already cloaked in more nautical metaphors: 'Sally is a pretty little craft/ Sharp to the fore and a rounded aft'.

<autobiographical_note>
In preparation for my family's visit to Rome in 1961 (BCE  – Before Considerable Education, as I was not yet 10) I collected a few useful words.


<digression>
Incidentally, this reminds me of another Roman reminiscence I recounted here, in which I referred to ‘a sophisticated and improbable mistake for a 9-year-old, but I was there'. On a re-reading, I realize that this was ambiguous and could be thought insufferably conceited. What I meant by those last four words was not to imply ‘... so you could expect some linguistic fireworks' but simply ‘...so I know what happened' (not that any memory is especially reliable).
</digression>

One of these was arrivederci, which I broke down into ‘arrive' (natch) and ‘backwards' (partly under the influence of another foreign der- word discussed here). It seemed to me at the time that ‘arrive backwards' was quite a plausible take on the idea of  leave-taking. The truth is much more simple: apart from the -ci (=‘you') it breaks down into much the same components as au revoir  (or, for that matter, Auf Wiedershehen).
</autobiographical_note>

Time for bed...  No, I'll do some checking, and add a bit about Catalan before I Publish.

PS Next morning: There.  And here's another clue:

PS And, while we‘re on the subject of river-based metaphors, I'm reminded of a word I come across often in France, which until recently I tried in vain to guess from the context (dictionaries being for me a last  resort – while being of course, an essential resource)  It's a word that I don't believe I've seen in any other context – road signs that specify restrictions on parking or access, for example Accès interdit...sauf riverains.

As that Larousse entry shows, the toes of a riverain/e can be either wet or dry:

Wanting to embrace father, but sure of failure. (10)

P4S – A recent visit to a museum in Rye (covered here) has added to my stock of river words. The museum was adorned with an embroidery/tapestry depicting various local characters. One of these is a rippier. An 1825 glossary with the snappy title

A Glossary, Or, Collection of Words, Phrases, Names and Allusions to Customs, Proverbs &c. which Have Been Thought to Require Illustration, in the Works of English Authors, Particularly Shakespeare, and His Comtemporaries 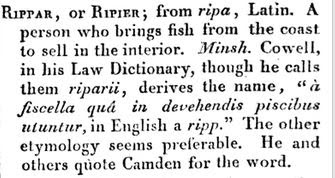 The word doesn't seem to be in current use (see the Collins Frequency Graph included below), but according to Onelook it is included in two more recently published dictionaries.