Last year I had a very festive 14 December. I sang at the Wokingham Choral Society's service at Sindlesham, then high-tailed it to Bearwood College theatre in time for the last number in the first half of Trinity Concert Band's Christmas Cracker (and all of the second half, I'm not so stupid as to...) to hear my daughter. 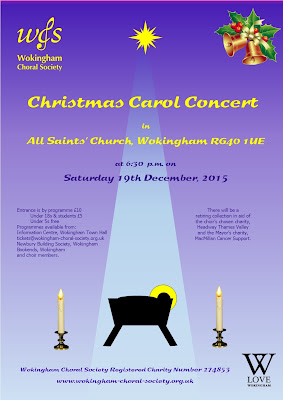 But this year the gods (or the elves perhaps?) haven't been so kind. The two concerts do coincide temporally, but not spatially. So tonight's rehearsal will have to be my last, before this:↴
←←←←←↵

Progress with the new book is glacial. I'm having to rethink my modus imprimanditurae,  as Cloud Convert (which I use to get from XLS to HTML) used not to do anything sensible with Comments in an XLS file, but now it does. So whereas I was writing my Comments including HTML markup, so that I could cut&paste them into an HTML file, I'm now having to strip out all the markup, and repunctuate them. Cloud Convert now collects them in a separate image file, which I can then <include>.

This is still not ideal. I'd rather have them in HTML. But maybe Cloud Convert would too. Keeping text in image files is, as they say in the trade, 'a bit smelly' (that is, sub-optimally elegant), so  the goal-posts may be about to move again – so I need to get a hot line into their future plans. In which case, maybe I won't have to strip out all the markup.   I am going out [to read the Help], and  I may be some time. They're pretty helpful, though.

A clue to keep you going:

* My feelings are mixed about missing the concert. It includes one of my Top Ten carols, "The Shepherds‘ Farewell". But the acciacatura**  in the first bar, which Berlioz – presumably – scored for an oboe or a cor anglais (something reedy anyway).... It seems to me that in a church the obvious replacement is the organ.

But I have never, even when an organ was available, sung this piece without a piano accompaniment. On a percussive instrument like a piano this acciacatura sounds to me like something out of Zorba the Greek.

** Elsewhere I have explained this word:


Another double letter in musical terminology forms one of a pair of similar-looking little notes, distinguished only by a "/" through one of them: the appoggiatura and the acciacatura. In the second of these, the "i" softens the "c", so that the word has five syllables: [a'ʧakatura]. Again, the only pronunciation I have heard (admittedly rarely) is [aki.aka'tura]; and again I'm not suggesting that anyone 'should' do anything.

...[T]he acciacatura is a sort of sneeze squashed in before the note it precedes. And music theoreticians about to raise an eyebrow at that sneeze metaphor will be interested – though possibly not convinced – by my mnemonic for remembering which is which: acciacatura/atchoo.