A few months ago I discussed (here) the strange way that reported speech not only attenuates the intonation of direct speech but actually misrepresents it.  On a train more recently I noticed a case that is just totally artificial – lying in wait for the ESOL (English for Speakers of Other Languages) student just when they are at their most vulnerable, and providing a model of inaccurate intonation. A recording comes over the Tannoy:


We will shortly be arriving at <station-name>

If one said this in the course of normal conversation (in a rather Ionesco-esque surreal universe?) the intonation would be something like this: 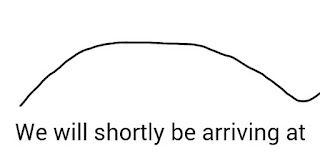 So what the disembodied voice says is

There are two problems with this, both having to do with the way a native speaker strings sounds together, one of which works in the student's favour:
On the homeward journey I listened again to the Tannoy. And surprisingly (not to say inefficiently, on the same service run by the same company, but just in the opposite direction) the intonation pattern was different: it still wasn't right, but at least the first bit didn't have the misleading upward flick at the end; and the intonation at the beginning of each place-name at least did not start by rising.

Still unnatural, with the tone leaping up to mark the splice, but not so bad.

But ESOL students arriving from their home countries certainly have their work cut out.

PS And here's a clue:

PPS The possible update mentioned in the digression from the festive note (which itself was something of a digression) has taken the form of a new post. And here's another clue:

PPPS A further thought on the subject of point of articulation, that arose last summer and may be of interest to choral singers. My choir was singing a setting of these words (from The Merry Wives of Windsor):


Pinch him, and burn him, and turn him about,
Till candles and star-light and moonshine be out.

These are the last words of the piece, with very quick notes and an extreme diminuendo, so it's important to watch the conductor. It seemed to me that the only way to do this was to learn it by heart. So far so unsurprising. The three nouns in the last line were a problem; how to remember the order?

Then I realized how clever (intuitive?, lucky?) Shakespeare had been. The points of articulation of the initial consonants move from the back of the mouth to the front:

So, as the music dwindles away to nothing (or a niente, as the Italians have it) the choir can whisper more and more with the point of articulation moving closer and closer to the audience and maintaining clarity.