Where there's a muckle...

At each end  of the Iron Bridge there is a 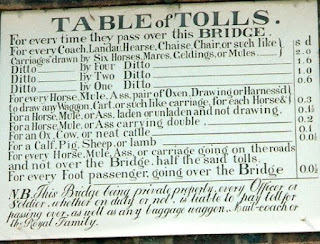 building. At the far end (from the eponymous town, that is) is a small building – the Tollhouse, with its tariff displayed on the wall. It's all interesting, but what particularly interested me when I first saw it was the last line.

The bridge was built over the three years 1777-1779, and opened in 1781. At about that time there was a royal visit.  I wonder whether the last line on that notice was an afterthought [and how many horses drew the royal carriage].

To be certain, someone would have to inspect the original, which may even [now I think of it] not have been contemporary. But I like to imagine the scene, with the Republican Entrepreneur arguing with the Town Clerk during the planning meeting:

TC: ...Then the royal party crosses the bridge...
RE: 'ow many 'osses?
TC: I don't think we can say at this juncture. What does it signify anyway?
RE: What does it signify? I'll tell thee what it SIGNIFIES my lad. It's not a charity I'm running. T' tolls must be paid  – for the carriage, and for any out-riders, and for any Officers or Soldiers accompanying them. Master Scrivener?
MS: Sir?
RE: Remind me to tell t' sign-writer to make it clear on the Bill of Tolls that there are no exceptions – not even for royalty..
MS: I must check sir, but I think he finished last week.
RE: Well 'e'll just have to unfinish it then, and squeeze it in ..[ etc. etc.]

A few years later, to accommodate the many sight-seers, a hotel was built at the town end of the bridge. Over a century before Lorenzo de Tonti proposed (whether wholly originally, or simply refining previous similar financial instruments) a new sort of life insurance called a Tontine, which "combines features of a group annuity and a lottery". Initial capital used for building the new hotel was raised using a tontine, and the hotel was called (and still is called) the Tontine Hotel. This method of finance strikes me as carrying on the same republican principles: they would not go cap-in-hand to T' Quality, begging for money. They sold Tontine tickets to any Tom, Dick or Harry who had a bit to invest.

Here, though, is a problem. In Wikipedia's Tontine article we read "tontines have been banned in Britain, pursuant to the British Life Assurance Act 1774," But later in the same article: "it [the Tontine Hotel] was built in 1780-84 by the proprietors of the bridge to accommodate tourists who came to view this wonder of the industrial age."

So in the late 1770s money started being raised for the Tontine Hotel, in spite of a law passed several  years before. Which suggests that Shropshire's attitude to laws passed Down South is not unlike (for example) Greece's attitude to European authority. Or, come to that, France's or Italy's ...ortcetera. Tontines may have been "banned... pursuant to the ...Act", but the pursuit can't have been very hot. Or maybe Wikipedia's... Nah... couldn't be.