MRSGREN and the magnolia

In our front  garden, much to the regret of MrsK, there is a magnolia. Its natural size (if I gave the G of MRSGREN its head and let it grow unchecked) is far too big for its position. If not pruned (something not usually required for magnolias) it would totally blot out the front of the house. Only the second-floor rooms would have a view [of sorts] between the greenery.

So I prune it constantly – not just once or twice a year...

Come to think of it, what would my father have said, inside, on a lovely day like this? Aren't there jobs to do in the garden?... (In his view, any day  – as far as getting the kids outside was concerned  – was lovely [just as 8.00 in the morning was the middle of the day]). But today,  here in sunny Berkshire, England, it really is lovely. The rest of this post will have to wait.

... but whenever I'm passing. This, as many gardeners will know, causes a feedback loop: the more it's cut back, the faster it grows. This ‘pruning'  involves two things: dead-heading (which gets rid of both the disfiguring browning petals and  the seed-pod – which would only sap the plant's energy), and taking out growing shoots (which avoids a trip to the garden shed for the secateurs).

This process affords lots of thinking time, and among the topics are MRSGREN – particularly one of the Rs G, E, and N. (The other three are there somewhere, I'm sure, but Physics with Chemistry O Level 1968 wouldn't guarantee my face against streaks of egg).

There is an evolutionary deal that links the first of the  Rs E, and N. In order to Reproduce, the magnolia needs to arrange for cross-pollination. And it does this by producing reproduction bombs. Passing animals are tempted by the outer casing of the bombs (which they need for Nourishment). Hidden away inside that outer casing is the bomb's payload – the fruit's seeds.

The passing animal (not necessarily passing, as many animals return repeatedly, on an intricate set of schedules ...

Aha – there's the M, both in the eater, and in the pollinator, and even in the plant itself, manoeuvring its leaves towards the Sun, to fuel the Growth of  the bloom

...to gather the bombs (fruit), eats them (N) and then excretes them (E – which further justifies the word passing [now I come to think of it], along with a bit more N for whatever plants happen to be there.

)  conveniently wrapped in a growing medium, and sterilized by the passing animal's gastric juices. 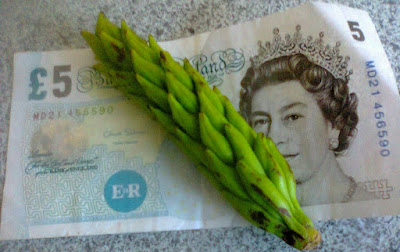 Gene-bomb from the magnolia, which escaped
my destructive inspection for several weeks

Then along comes Mr McGregor and interferes. We horticulturists [Guilty, yer 'onner] know that in order to extend the flowering time of a shrub you need to dead-head it (which, when you think about it, is a pretty dastardly thing to do – it frustrates the plant's deal with the passing animals, not entirely unlike the way a cuckoo frustrates the deal between the duped "parent"-bird and its mate).PPPS

Like any other living thing, the magnolia needs to Reproduce before it dies (or, more precisely, before it stops being fertile). The poor dead-headed magnolia thinks (if you'll excuse the Princeps-Caroline anthropomorphism)  "Bugrit. My job is not yet done. I must have another go." So it starts again, Growing a new flower – only for my dead-heading to snatch the victory cup from its lips again, and again, and ...

As Samuel Morse so nearly wrote, WHAT HATH DARWIN WROUGHT?

And while we're on the subject of Movement (in plants), most plants exhibit phototropism, which accounts for Jerusalem Artichokes being so-called, as Etymonline says:

PPPS I've realized on re-reading that this metaphor might need a bit of unpacking (itself a complex metaphor, though one that is quite current  [at least it is among people who listen regularly to In Our Time]).

P4S: (Springing into life again after a year;) The magnolia's beginning to blossom already: 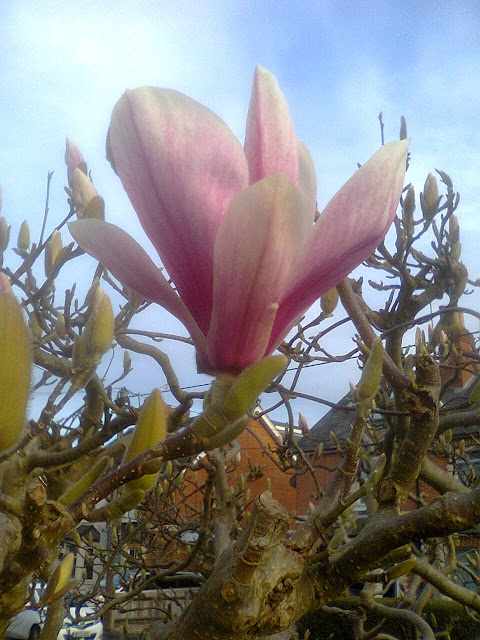