In bibliographies quite often the abbreviation ed. appears.  I met  it often during the work mentioned here, which involved getting information about quotations. I was at first confused, though, by Italian sources (which had their own way of saying ed. – a cura di).

So what's the problem? asks a voice in my head. There's an obvious link between a cura di and the verb "curate".


<digression>
Did you catch that vocal fry? [not that I'm an adolescent female trying to imitate Britney, (whoever SHE is m‘lud) {as suggested here}, I'm just not entirely convinced that whole-hearted agreement is appropriate]
</digression>

... but that use of curate (a verb meaning something like pull together lots of information from disparate sources for the benefit of other potential consumers of that information), although it's been around for a long time (in art galleries, museums, and libraries, mostly, but also –  in commonwealth/cricketing countries, where British English use groundsman in place of the West Indian/Australian/New Zealand/Indian curator), was not in wide use at the time of my initial uncertainty (1978/9). 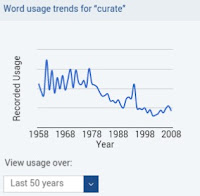 I looked first for confirmation of my intuition to the usage frequency chart provided by Collins. But there were two problems (apart, of course from the one I remarked on in an earlier post – the absence of a scale):

Web-based curating couldn't  get started until the necessary tools (such as Pinterest) became available. And this extract from the whois database speaks for itself (not that Pinterest is the only such tool – it's just a widely used one):

The topic of curating occurred to me a while ago as suitable for a blog when I caught, on BBC Radio 4 Extra The TED Radio Hour. But before I put finger to keyboard the series finished. Now, though, the series has hit the big time, and is being aired on BBC Radio 4 [no link, because iPlayer automagically reroutes you to Radio 4 Extra].

We are used to US hours lasting a few minutes short of 50; they are the Jack Bauer "Hours" that mean that the boxed set ...


<digression type="potential">
When was it that boxed sets lost their participial suffix? In my days at OUP we knew what a boxed set was: it was a set of books that had been or were to be (in editorial discussions) boxed. The -ed is assimilated to the....But this is beginning to be more than just potential ...
</digression>

... of 24 short-changes the buyer to the tune of about 5 hours. A bit like pints. They're just different Over There.

The TED Talks are a great place to browse... great in more than one sense. The size of the archive, and the breadth of topics it discusses, is huge – and can be daunting. But help is at hand; every week in The TED Radio Hour Guy Raz takes a topic, selects bits of TED talks on that subject, and interviews the speakers (and other experts in the field).  This is curating at its best, guaranteed to lead the way to and through some brilliant, if time-consuming (

Speaking of which, is that the ti... I'm outta here.

) solved that clue: CONDESCENDING.
Posted by @BobKLite at 11:36