Today‘s TEZZY (for a Time-wasting site) goes to this fascinating interactive effort – full of interest but (if I‘m being brutally honest) hardly of critical importance for the fate of Civilization as we know it. It‘s based on a corpus of reports by students of their teachers:


This interactive chart lets you explore the words used to describe male and female teachers in about 14 million reviews from RateMyProfessor.com.

And perhaps I do underestimate its importance. Maybe there is an interesting conclusion to be drawn from  the fact that students are slightly more likely to call a female teacher happy, but much more likely to call a male teacher funny. I‘m not sure what it might be, but it‘s certainly fun toggling between the two and watching the blue dots change places with the pink ones (OK, they‘re not pink really, more like orange) in a sort of bird‘s eye view of a courtly dance. I think it‘d be more significant if one could compare ratings of the same-sex teacher by different-sex students, and then to compare S>T, S>T, S>T and S>T. (More significant,  but I‘d still be hard pressed to say exactly  what it signified.)

I'm still trawling through the vowel+l pairs. L was a dispiriting letter to start with. I should have started with R or W – much more interesting. But I am a slave to the alphabet. I am nearing the end of the -el-s. On a hunch, I went back to check on the raw totals (net of any systematic exclusions I choose to observe). And the numbers of hits in the Macdonald English Dictionary (that is the UK site, despite the Mit) turned out to have an alphabetical regularity: 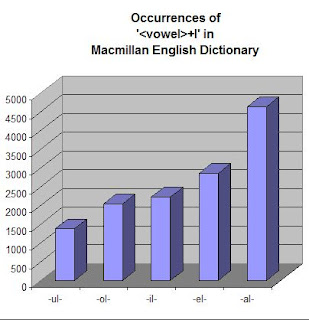 <rant>
And that is a subordinating conjunction (or  something like that – the naming of parts isn't really my schtick). Another bugbear in my admittedly bugbear-ridden life is the growing and unaccountable and mindless and downright lazy


<meta_rant topic="*laMENtable">
And there's another one. Get the stress right for Heaven's sake. I know it's easier to match the stress of the verb, but "them's the breaks, kid" as someone (maybe John Wayne) once said.
</meta_rant>

....tendency to use 'So' as an all-purpose linguistic tic that seems to mean something like 'Here comes a sentence, but don't expect it to have a link to anything that's gone before and I don't care about any fruitless efforts you may make to find one – you seem to have mistaken me for someone with a modicum of consideration for the people I talk to'.

...although I haven't finished -el- I've done more than half.

Another TEZZY observation: with a few exceptions, a male teacher is more likely than a female one to be assessed as fat. The exceptions are in Computer Science, Philosophy, Psychology, and Sociology. Make of that what you will; of course, in those (and all cases) the review might have said ‘<teacher-name> couldn't be called fat'. (Come to think of it.... Still, it's fun.)

And while we're on the subject of statistical anomalies, how about this (courtesy of Blogger, a record of page views [to Harmless Drudgery] for the past week):