My soul doth magnify the problem

On Sunday I visited my alma mater....


<aside>
and no, I haven't forgotten the alma mater speculation I indulged in 2 years ago [about a possible link between nourishment and the soul].  My investigations aren't complete, but Romanisches etymologisches Wörterbuch, my Bible for Romance origins says this: 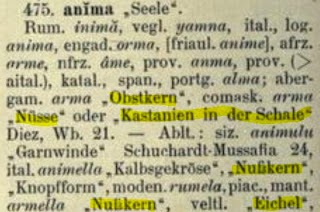 The words I've highlighted in that excerpt all have to do with nuts/kernels/chestnuts/acorns, and the headword Seele, means 'soul'.

[And if like me you aren't entirely at home with German {O-level Best Before End June 1969}, the bits before the italicized words are abbreviations of names of languages and dialects (for example, siz. = Sicilian, log. = Logudorese {spoken in Sardinia}  etc., and the words in quotation marks are definitions.].

And there we sang Dyson in D. I tweeted whimsically – not to say predictably (

"What a polymath! Bet his organ doesn't lose suction."

But O2 gobbled up the tweet (not omitting, of course, to debit me for sending it: there it still is in my Sent folder).

Italianate pronunciation of Latin now gets involved. Listen to this YouTube clip; the relevant word starts occurring from about 30 seconds in, and is repeated as often as Vivaldi chooses. When this vowel (not unlike the English /ʌ/ phoneme – the one that occurs in, for example, "exulted", although it is closer to [ɑ]) is heard by a strictly Anglophone ear, confusion arises – as is exemplified in this YouTube comment.

<note>
I must learn not to read YouTube comments  – bad for the blood pressure.
</note>

It's only the Magnificat, in Latin, that highlights this issue for me. My choir is singing lots of very different pieces at our forthcoming concert, and several of them use one of the words but not both. In Bruckner's Christus Factus Est, exaltavit, in a Palestrina piece Exsultate Deo, and in a Viadana piece, Exsultate justi. (The spelling with s comes from our scores, European Sacred Music, though other sources have no s [incurring the impotent wrath of yet another YouTube commenter on that Bruckner piece:

So in the root there was an s – the sort of s you get in somersault.

As so often when linguistic Nazis insist that only their truth is right (and they tend to congregate moth-like about the flickering light emanating from YouTube), both options are fine.

b
PS The concert, incidentally is by no means all in Latin. There are also George Shearing's jazzy settings of Shakespeare sonnets and other lighter songs. Well worth an evening out. 13 June 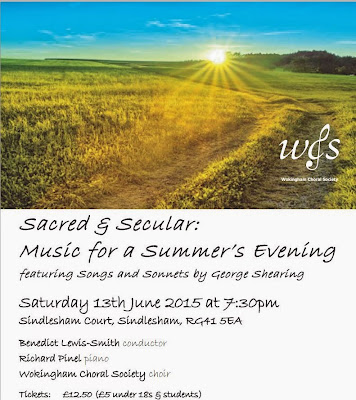