Milk, milk products, and plants associated with milk have been exercising my mind of late. Here‘s what Etymonline says for lettuce (n.)

Probably?  I'd say it was a pretty safe bet. A common process in Romance Philology (and possibly others – I wouldn't know, though I can't think why it shouldn't be so) is palatalization:


...the production of consonants with the blade, or front, of the tongue drawn up farther toward the roof of the mouth (hard palate) than in their normal pronunciation.

Palatalization can take many forms, often in the same language. In  Portuguese, for example maré  cheia-(='high-tide' – literally full-sea) and praia (='beach') both owe their initial consonant to Latin PL- , although [ʃ] and [pr] could hardly be less alike. 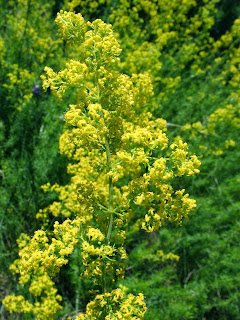 Elcock's The Romance Languages refers to ‘the evolution of the group -CT- to -it- which took place all over the [BK: Iberian] Peninsula cf. Port. noite,  Cat. nit, Arag. nueyt' and then mentions lahtaira "yellow goose-grass" (< LACTARIA, Cast. cuajaleche).'

Cuajaleche (gallium verum is its $10 name) is more commonly known (in my dialect) as ‘lady's bedstraw' [or in some gardens as that bloody weed]. It is very acidic (as is suggested by its Latin name...

...)  and as the Castilian cuajar means ‘curdle'

I suspect that  the Castilian name has more to do with its properties when added to milk, than with its the milky appearance – of its sap   – as in the case of the French laitues or the English milk-wort for that matter.

...from PIE root *glakt- (cognates: Greek gala, genitive galaktos, "milk"), which, along with  *melg-  (see milk (n.)), accounts for words for "milk" in most Indo-European languages

I wonder if they knew...
Or was it just an extrapolation from Milky Way?

Anyway, you may have noticed that Etymonline took care to say ‘from lac  (genitive
lactis) ' [my emphasis] to explain the appearance of 't' in the root. I've mentioned before (here and in several other posts)  the way Romance philologists explain this, without mentioning one grammatical form that is almost always irrelevant in matters of the formation of Romance vernaculars  (the nominative) and one that is always irrelevant thereto (the genitive): the root is LACTE(M) (and if that sort of thing floats your boat you could call it "the accusative with the 'm' ending in parentheses". And this strikes me as more convenient and more accurate  – it's certainly more efficient .


<digression type="bee in bonnet">
that is if you don't have to keep justifying yourself to  Classical scholars – who often seem to have a keen sense of ownership [custodianship?] of Latin.
</digression>

But the most interesting topic for further study is mentioned in that Etymonline piece on lactation: After citing the PIE *glakt- and *melg-: '(the absence of a common word for it is considered a mystery)' Hmm.

Time to be getting on. But here are a couple of clues to keep you going:

PS Time for the answers:
OUTSTANDING and SHOTGUN.