This page addresses a use of the present that is peculiar to sports commentators:

Like newspaper headlines and personal anecdotes ("So I'm walking down the street yesterday, and this guy comes up to me and he says ..."), sportscasting has a special affinity for the present tense. But unlike other uses of the historical present—which typically refer to past events, thus "historical" present—the sports announcer is calling a game that is playing out before our very eyes. If ever there were an appropriate time to use the present, surely this is it. So what's so strange about it?
...

Both "Louise kicks the ball" and "Louise is kicking the ball" are present tense, of course. But what makes the sportscaster present remarkable isn't tense. It's a distinction known as aspect, which refers to the period over which an action takes place. The "is kicking" construction has progressive aspect, because it refers to an event that unfolds over time, whereas "kicks" is the older, simpler form that is used for a variety of purposes, including habits ("Be careful—that horse kicks" does not mean the horse is necessarily kicking right now) and verbs of thought or emotion ("I think I'll kick the ball").
</explanatory_note>

I would like to consider another, also peculiar to sports commentators, but using an analogue of a device that has long been used by language teachers (both MFL [Modern Foreign Languages] and ESOL [English for Speakers of Other Languages]).

This device is the timeline diagram. It lets students in one timeframe (the now of the lesson) think about language that deals with events that happen at different times. Timelines have been used in language teaching for many years. I remember my own French master, the sainted Cedric Baring-Gould who I’ve mentioned several times before, drawing something like this to investigate the difference between habitual action in the past and an event:

With a bit more time and artistic inspiration, a diagram like this can become quite impressive. Here’s one‡  I did for an ESOL class a few years ago, where the diagrammatic paraphernalia has been reduced to Then and Now boxes, but the same principle is at work – time progresses from left to right, and the language used at any point refers to that time: 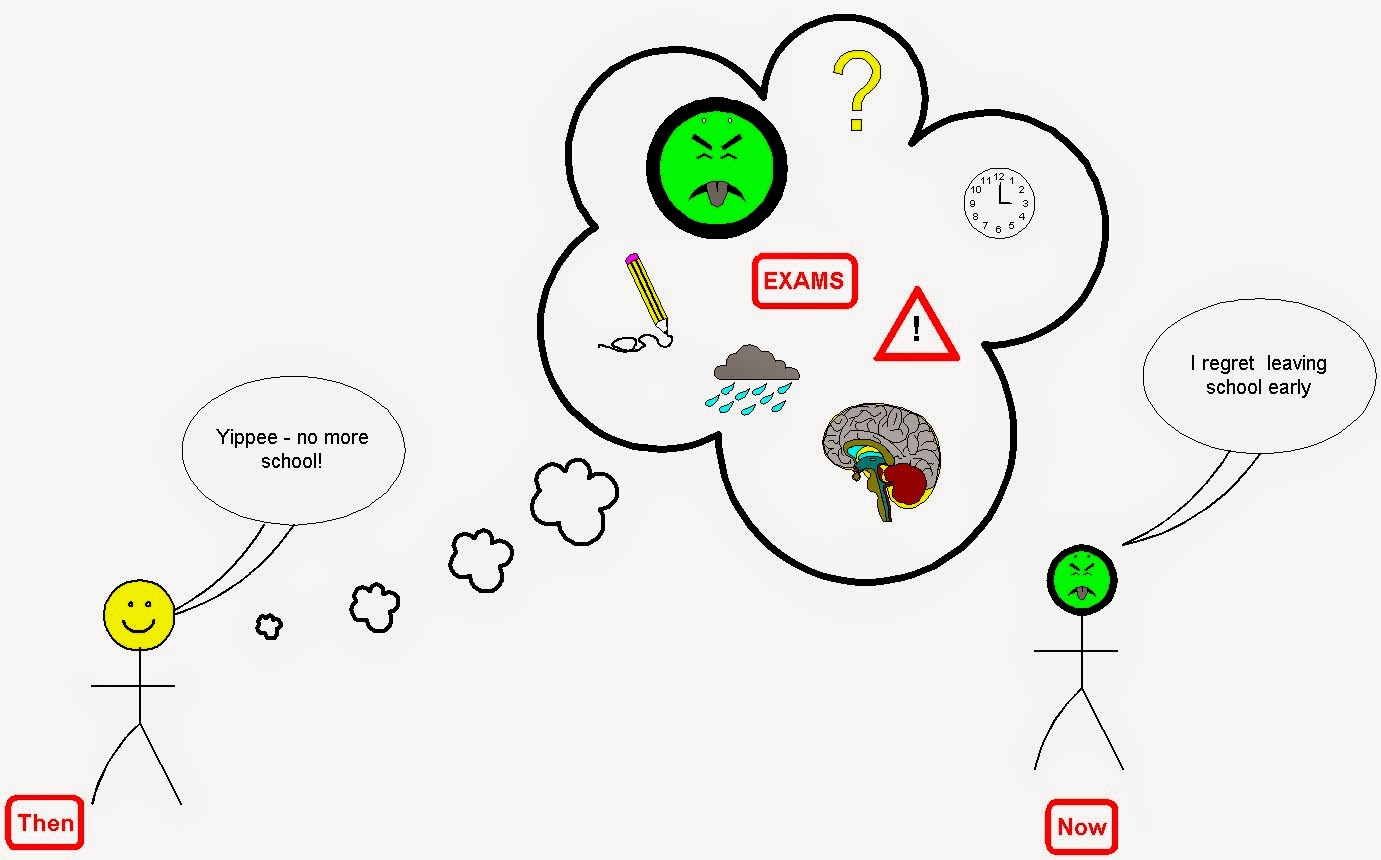 ‘Regret leaving’
Versus
‘Regret having left’ 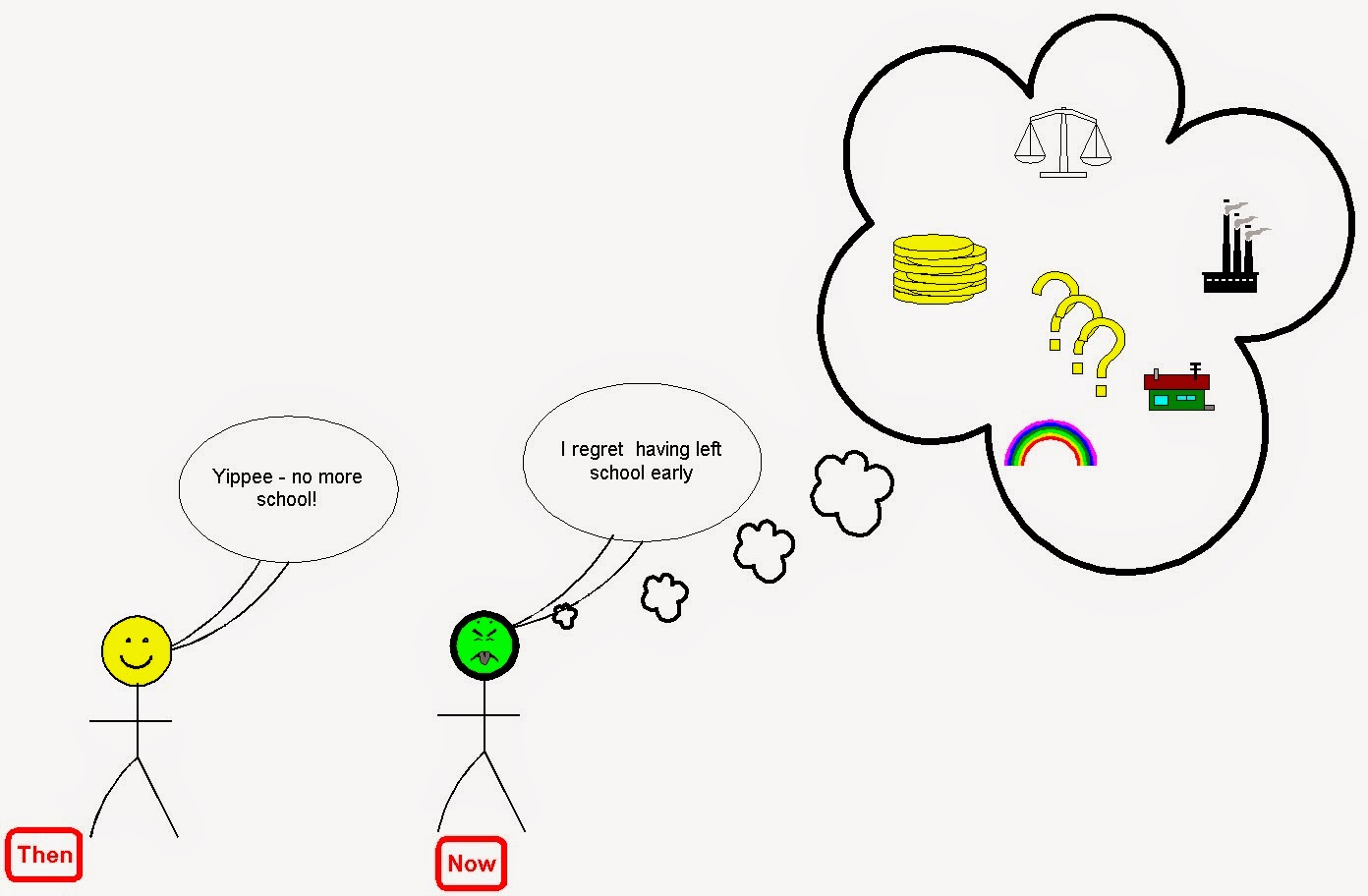 Instead of such diagrams, which can freeze time while we look more closely at what’s going on, sports commentators have video playbacks. So they can say things like:

[technical aside: ‘Can we freeze it there?’]
‘Now if he crosses it there, it’s a certain goal.’

The simple present to express a conditional! This is one in the eye for the zeroth/first/second-type† merchants. Given the right visual context, the simple present can be used to frame a perfectly clear conditional. And supposing there’s a Pedant among the Pundits:

[technical aside: ‘Is it possible to stop the action  there?’]
‘If he had crossed it at that stage, it would have been a certain goal.’

What has this achieved? It requires the audience to tune out of a video-context and start parsing formal syntax. In what way is this better?

[Time off for bad behaviour. Back soon.]


†This, I realize on second reading, may need some explanation. It is a reference to a system of classification of conditionals, widely used in the ESOL world (and possibly also now in the MFL world, which I have not been involved in as a teacher for 10 years). Some people find it useful. Have a look here. It seems to me to lead to unnecessary ratiocination (or, to use a computer internals metaphor, 'thrashing' – when the computer spends all its time trying to decide what to do).

Update 2014.07.21.10.30 – Added this note:
‡ For the purposes of the argument, it's not essential that you agree with the distinction (between 'regret leaving' and 'regret having left'). In fact, I'm not sure I do any more (it's about 8 years old). If I redid it now, I would at least redraw it. What matters, in this context, is just the principle of using a graphic to freeze time while a student considers appropriate language at different times.