And in that article I was particularly interested in this:

...dog is one of a number of English words for animals (all ending in –g) of obscure origin and without cognates in other European languages...; they include hog, stag, pig, and the second element of earwig.

That 'include' represented for me a challenge; perhaps dag (a runt), shag (the bird that lays eggs inside a paper bag but famously ISN'T a cormorant), bug, and possibly even hag and old lag if the G-ending group extends to human animals: look for an update for news of further research.

<PS>
I haven't found this dag in any online dictionary. Maybe it's dialectal; it's the word behind Dick King-Smith's Daggie Dogfoot, so-called because he was a dag with a misshapen foot. And I should underline the uncertainty betokened by all those perhapses and possiblys. I'm pretty sure my hag speculation is wrong, for a start. The jury's out on the rest...
</PS>

Jean Berko Gleason is a distinguished psycholinguist – perhaps not a household name, though her brainchild, the 'Wug test', is perhaps better known (at least among people with an interest in linguistics). The 'Wug test' is a means of investigating the internal development in children of morphological rules.

Professor Berko Gleason (she now uses both names, though when she wrote the Wug article she was plain 'Berko') invented  a world inhabited by invented creatures; children were shown pictures, told that 'this sort of creature is a wug', and asked to identify groups of these creatures. English has lots of ways of pluralizing a noun – no change (sheep, fish...), change -us to -i (radius → radii...), add -en (ox → oxen [or do something else involving '-en' {child → children, brother →  brethren...}]), change -ex or -ix to -ices (matrix → matrices)† etc, but by far the most common device is to add an s (though this simple idea hides several options [/s/ {rabbits}, /z/ {gardeners}, /ɪz/‡ {radishes}]‡‡. What is the word for 'more than one wug'? Wugs, of course, with /gz/.

As that article says:


A critical attribute of the test is that the "target" word be a made-up (but plausible-sounding) pseudoword, so that the child will never have heard it before. A child who knows that the plural of witch is witches may have heard and memorized that pair, but a child responding that the plural of wug (which he has presumably has never heard) is wugs, has apparently inferred (perhaps unconsciously) the basic rule for forming plurals . 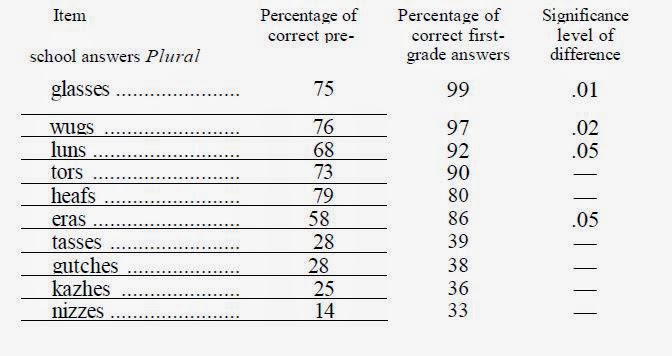 But as a psycholinguist Berko would certainly have met the idea of phonesthesia (which I discussed here:


...I was listening the other day to John Lloyd's The Meaning of Liff at Thirty, which included an interview with Steven Pinker. Pinker introduced the word – new to me and to John Lloyd (whose cv in Wikipedia for some reason omits reference to one of his earlier  professional productions, Paradise Mislaid [get it?]) (As it was one of the highlights of my misspent youth, I'd better get editing....) – Pinker introduced the word (I was saying) phonesthesia, more vulgarly known as 'sound symbolism'. Phonesthesia, says Pinker (the discussion of this feature lasts for a bit more than a minute, starting at 18'40") is 'the way that the sounds of words remind you of what they refer to'. And the example he uses is 'sn-' words - snout, snuff, sneer, sneeze, snooty.... - all which have something to do with noses.

I wonder whether Berko chose wug entirely at random, or whether she knew as a linguist that a monosyllable ending in g had a good chance of being an animal – or whether, as a native-speaker of English,  she just knew.

† And sometimes this rule is nuanced by other considerations: some people (myself included) prefer to use  'indexes' for the plural of 'index' when it refers to the reference bit at the end of a book, and 'indices' for the plural of 'index' when it refers to ², ³, ⁴, etc.
‡In some pronunciations /əz/. I'm not conscious of an accent that uses both variants to distinguish meaning, but I think I've heard accents that use both. Berko's 1958 article uses /əz/, which – I imagine – is the preferred variant in American English.
‡‡No prizes for recognizing the Peter Rabbit reference, but a certain feeling of smugness would not be inappropriate.