A few day ago this tweet swam into my ken: 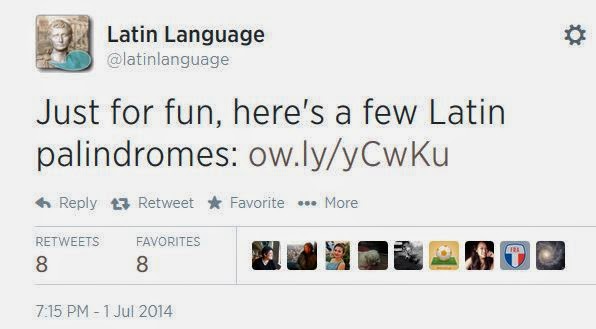 And I was surprised to see that one of them was this:

which they gloss as The sower Arepo holds the wheels with effort.

<autobiographical_note  theme="sator square"
date_range="July-August  1961">
I had seen it before in the Catacombs in Rome, though examples have been found further afield. As an early Christian cryptogram it was quite widely known, and (typical of oppressed minorities to this day) the early Christians had extraordinarily good international means of communication.
</autobiographical_note>

After a moment's thought I realized that it was, necessarily, a palindrome – given what I already knew it to be: a word-square. I say 'early Christian cryptogram' , although this carefully measured account claims to be less sure [I'd be surprised, though, if he didn't believe it]
:

[I]n 1924, C. Frank32 made the startling discovery that the square could be so arranged as to produce the first words of the Lord’s Prayer twice over (except that there was only one N instead of two), plus two A’s and two O’s. Shortly afterwards, Grosser33 came to the independent conclusion that this unique combination could be explained by a cruciform arrangement whereby the N was used twice. The remaining four letters, two A’s and two O’s, would then be disposed thus:

A theory such as this cannot be proved. Its strength lies in its intrinsic probability, plus the fact that the mathematical odds against such a combination occurring by chance are astronomical.

(My use of the term left-overs shouldn't be read as implying anything dismissive: 'I am the Alpha and Omega' has biblical resonance. Those letters even find their way into the Christmas Carol Unto Us is Born a Son:

And during the preparations for Easter Midnight Mass [in the Roman Catholic rite, of course{!}] the celebrant prepares the Paschal Candle with chips of incense [I think – I never got that close] inserted into the wax in the form of those two letters [repeated in the 'quadrants' defined by a crucifix]. Those two letters, repeated round about a crucifix, are by no means random 'left-overs'.)

Another feature of this layout is explained here:

And, again, with the right (RC) background the 'P=Rho' ploy is not so fanciful.

<autobiographical_note theme="chi-rho" date_range="1958-1960">
The membership insignia of the Guild of St Stephen, trade union of altar boys [though I can't recall them ever exercising their industrial muscle] was a chi-rho medal, representing the first two letters of Christ's name – ΧΡ:

This was the sign that convinced Constantine that God had his back (In Hoc Signo Vinces – which explains the IHS signs that frequently appear in Christian art [don't ask me why it's not IHSV.  I don't make this stuff up.‡ Maybe it's  something to do with predictive text, or perhaps God had run out of the right sort of cloud...

A while ago (too long ago for me to find an exact match on the M&S site) I was given a tie quite like this. And the pun in my title has reminded me of its stock ID: Sartorial tie. But the person who programmed the stock control software – the magic stuff that makes receipts say so much – must have been dyslexic (or maybe it was just a Friday afternoon). As a result, the receipt said that what MrsK had bought was a TORTILLA TIE.

I notice from that link that the GoSS webmaster thinks that logo is an appropriate word for that device.  The Greek λογος [='word'] is the root of the English logo, which was used to refer to a device based  on a particular graphic representation of a name.

For an OUP Christmas revue I wrote (or resurrected – I seldom miss an opportunity for recycling) a Val Doonican spoof called 'Delaney's hold-all', based on this (after you've skipped the ad, you might want to skip the first 50 seconds of chat):

As you'll probably have noticed, I had a bit of trouble with the third line. I might have done something with the word 'logo', but didn't. Some sports goods manufacturers have a word-based logo but many don't; and back then the word logo in the wider sense was just beginning to take off (in fact if my 'resurrected' was right then I was probably writing when the impact of IRA violence was most strongly felt on the mainland in the early-mid '70s). The Collins Dictionary provides this diagram showing how the word's usage took off:

(who, vainly,  stop using it, because our precise meaning won't be understood). But we might as well give up and join in: that's the way the language is going‡, regardless of the silly Cnuts who would stem the tide. {I know Cnut the Great didn't either, but the open goal was too inviting}.

</rantette>(I know this ship has sailed, but still...)

Update 2014.07.24.14:55 – Added this PPS
‡An interesting blog from the OED stables refers to this tendency to be hung-up on a supposed 'original' meaning based on etymology and calls it the 'Etymological Fallacy'.

‡ A man on the radio has just likened Constantine's Christianity to a snowball: the later the historical source, the greater the Christianity. So my I don't make this stuff up doesn't rule out the possibility that someone else DID.
Posted by @BobKLite at 19:44