<digression theme="How many angels fit on the head of a pin?">
The tweet wondered whether pleonasm was the word. This is a word close to my heart, and one that – every now and then – I think I understand. 'This is both a square, and a two-dimensional plane figure having four equal sides and one right-angle'. That is a tautology: it says τα άυτα [='the same thing'] in two different ways.

But this slight change makes it pleonastic: 'This is both a square, and a two-dimensional plane figure having four equal sides and four right-angles'. If a plane figure has four equal sides and one right-angle, the other angles will be the same. A pleonasm says more than is necessary. But saying the same thing is 'more than is necessary' (and I think the is there is pleonastic; sorry.)

So there's a good deal of overlap, and often when I try to work out which applies in a particular case my brain starts to hurt. Beatus vir qui ... says 'A pleonasm is a tautology'. It's not, but I wish I didn't care.
</digression>

One of these was 'null and void' , which rang a bell whose tinkle led me to The Stories of English.
But Amazon's Read Inside feature didn't cover the relevant section (which is on pages 152-3)

<digression theme="pipe-dream" likelihood="0">
Penguin missed a trick (or more likely decided that the trick wasn't worth the outlay) with this book. It was written like a coffee-table book, with two or three sorts of text and standalone features, quite like Words: An Illustrated History of Western Language (which I had a small part in publishing – but a bigger part than I wanted [and that's a whole 'nother story] ).But Penguin just squeezed it all together with tiny margins and no kind of visual clues to what sort of text was which. The reader's never sure whether the current text is part of the main argument or part of an illustrative aside. It needs changes in line-length or font or shade of paper to make it a smooth reading experience.


My fantasy – though I haven't discussed this with the good Professor – is to win a large amount of money and become a proper publisher. My Rights department would negotiate with Allen Lane to acquire the rights for a properly designed book, and my Design department would make this book CanDo Publishing's lead title.
<digression>


So I turned to The Story of English in 100 Words as there's only so much new stuff you can say on this subject, and from time to time the paths trodden by one author in separate books cross. Sure enough, in the section dealing with Chattels, Crystal says this: 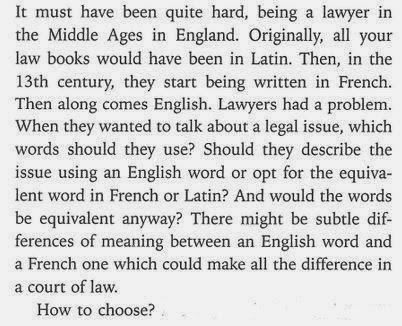 Back in the earlier book, in one of those asides (which  interrupt the flow but wouldn't if the book was designed properly) Crystal explains that they didn't choose; they went with both. Here are some of his examples (from p. 153):

But both null and void are from French: null '"void of legal force," 1560s, from Middle French nul' and void 'late 13c.†, "unoccupied, vacant," from Anglo-French and Old French voide...' So why the tautology?

Crystal (of course!) answers this:


It was not long before the habit of doubling became extended to pairs of words [I think that 'pairs' is pleonastic, by the way

] regardless of their language of origin. In such pairings as null and void [knew I'd seen it somewhere]... we see French words together....

That'd better be all for now. I meant to lay into the Indendent's top ten, but as the proofs were delayed I started on the Index (for #WVGTbook for the Kindle version only). This threw up a fair few corrections‡ that I need to make in the proofs. Which'll make the proof stage more onerous than I had planned for. And I want to reach a breathing space in the Index work before I get stuck into the proofs, so I really have to go.

Update 2014.01.25 18.20 – Added this note:
†Maybe this is the clue: void had been around for nearly two centuries, and users felt that it needed to be given added emphasis by adding the trendy new null.

Update 2014.01.26 20.20 – Added this note:
‡Not just corrections. I'm also finding improvements I can make. One of these is an addition to the notes to the UO  notes section, to include a word that I've only ever met in one context: third-form biology (that's 'year 10' to all you young whipper-snappers). Here's the full Notes section:

Freebies (Teaching resources: just over 44,100 views  and well over 6,000 downloads to date**. They're very eclectic - mostly EFL and MFL, but one of the most popular is from KS4 History, dating from my PGCE, with over 2,250 views and nearly 1,000 downloads to date. So it's worth having a browse.)