So you're allowed to cheat...?

In one of the many review of the year/predictions programmes aired in the past week, Tim Harford inveighed against infographorrhoea (he didn't call it that, but I can't quote him verbatim as I can't recall the programme's details): the tendency to splatter documents with eye-catching but meaningless and/or misleading infographics. (It was very funny and right on the money; I hope it'll make it to Pick of the Week.)  Ironically, as I write a fatcat developer is being interviewed on You and Yours, trying to defend just such an infographic.

A few days ago, I saw and retweeted (from the hip – will I never learn?) this: 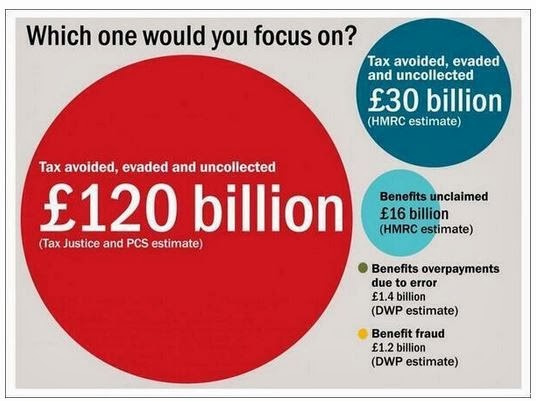 It's making a good point. Government priorities are wrong-headed in a way that in less socially pregnant contexts would be laughable.  Stopping tax avoidance and evasion is the LOW-HANGING FRUIT – easy wins for a Chancellor needing to save a billion or two.

But having retweeted it I began to feel a bit uncertain about its integrity. The dark blue circle looked like a pretty dodgy quarter of the red circle. And even if the dark blue circle was the right size, the
light blue £16 billion circle, which should be slightly over half the size of the £30 billion one, was barely a third of the size (if that – it's hard to tell, as the 'circle' isn't circular).

The little circles are so small that it's impossible to tell precisely what they are supposed to represent. The yellow one, which – conveniently for my schoolboy arithmetic – should be one hundredth the size of the red one, is obviously far too small.

Just for the record, I had a bash at it with Visio. My additions aren't exact, as the configurations of our two graphics tools are bound not to match: 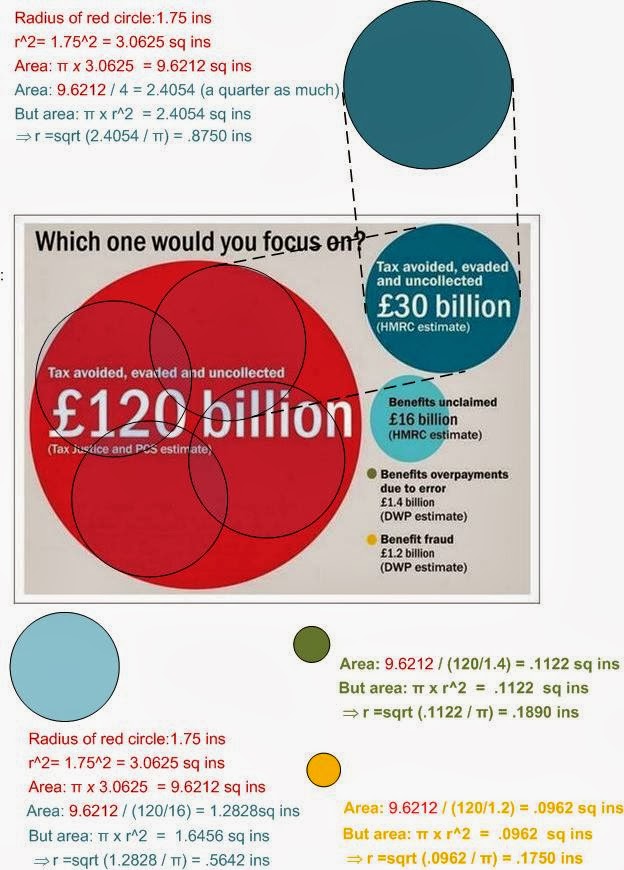 The arithmetic may not be perfect; in particular I ignored the possibility of negative roots for radii of circles, which –  in the view of someone who, to quote my maths master, 'took the soft option of becoming a Poet rather than a Plumber' (as for Doc Lewis there were only two sorts of people in the world, Plumbers and Poets) –  wouldn't make much sense in this context (though maybe they do in black holes...?). But my new circles are a lot closer to reflecting the truth of the statistics.

They do however fall into the trap they were supposed to, of taking the largest figure as a basis for the scale for the whole diagram. There are two scales here; a decent infographic would take the largest two circles as bases for two scales, and show the other three as proportions of each. This is grist for a possible future update. But I must get on – otherwise the proofs of the hardcopy of #WVGTbook will arrive before I've got the index sorted out.


L'envoi (French for what what HR trainers call 'take-homes')


The fact that the bad guys fight dirty, using 'infographics' full of omissions and distortions, doesn't justify the good guys in doing the same. I'm pleased to add my weight to that of people looking for a fair deal for benefits claimants, but I regret retweeting an infographic that was more than just 'economical with the truth'; it was plain fallacious.

I'm nearing the end of the initial trawl though the speech sounds used (in the one dictionary I'm using), ready to create an index (useful for the Kindle edition ['This phonemic sound can be represented by...', with immediate links to example words], but not for the hardcopy one [plenty of 'rhyming dictionaries' already on the market do the same job better]). The monophthongs are as given in the standard IPA 'phonemes of English' chart; well, they couldn't really not be. But the diphthongs, triphthongs, and indeed tetraphthongs  (if there is such a word) are far more numerous. I'm not sure how to present this, without muddying the waters for EFL/ESOL students...Hmm...

Update: 2014.01.12.17:30 – Added PS:
PS You'll notice from the footer that I have overridden the 'perhaps...?' and am working on an index. For the reasons I gave in my last para, though, I'm not sure what value it adds; so, rather than edit all the footers to make a claim that I'm still unsure about, I'm leaving it for now. (And if anyone can teach me to use pages rather than posts in Blogger – which I suspect would save me a lot of time – please feel free....

Update: 2014.05.16.17:00 –Updated header:
Mammon When Vowels Get Together V5.2: Collection of Kindle word-lists grouping different pronunciations of vowel-pairs. Now complete (that is, it covers all vowel pairs –  but there's still stuff to be done with it; an index, perhaps...?)

Freebies (Teaching resources: over 41.050 views  and 5,700 downloads to date**. They're very eclectic - mostly EFL and MFL, but one of the most popular is from KS4 History, dating from my PGCE, with nearly 2,100 views and nearly 1,000 downloads to date. So it's worth having a browse.)

Email ThisBlogThis!Share to TwitterShare to FacebookShare to Pinterest
Labels: #eltchat, infographics, Tim Harford, When Vowels Get Together - progress