...the boxer, perhaps... But no, this is the last of my semi-festive posts – honest. 'Tis the season for reviews of the year, lifestyle detoxing, etc – never mind being jolly.

Two weeks ago this query appeared at  UsingEnglish.com:

hello! i want to write something for my twitter bio. please help me with these sentences, which one is the most correct?


One reply referred to the carol 'Deck the halls' My lip twitched, but didn't curl (out of respect for writer). But brought up, as I was, on the David Willcocks setting, I usually look daggers at any fellow chorister who makes the hall plural.

Part of the following discussion (now deleted as it was fun but not particularly illuminating) involved somebody's contention that this sort of deck was derived from decorate. Well, NO. They're related of course, being both derived from the Proto Indo European *dek-. But they both appeared in Middle English  at more or less the same time in the historical record: deck / decorate. Both early 15th century.

The first is, some would say, archaic, though the British National Corpus lists 101 cases of decked, of which the first 20 are these:

A few of the remaining 81 may involve fisticuffs, but all these use the word in the lavishly/garishly/demonstratively/excessively/vulgarly... decorated sense. See more here.

A version of decked that is less arguably archaic is bedecked, with only 38 hits. Which reminds me of another properly archaic word.

One short-lived New Year's resolution involved picking an obscure word and trying to drop it naturally into conversation as often as possible in the following week. (I have a feeling The Readers' Digest's 'It pays to increase your word power' may have been involved in some way.) My last word, in the second week, was bedizened. The Collins Dictionary has an unsung feature that gives usage trends: 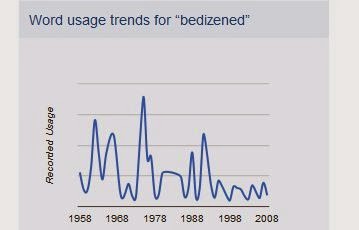 The first of those spikes (annoyingly there's no scale) may have been MY work.

(Incidentally, for some reason, while you're visiting that Collins page, you are invited to Like it... :-?)


Right. Back to the harmless drudgery.

Update 2014.01.04.13:25 – Lots of ellipses in BNC data to keep it within bounds
Update 2014.01.04.20:55 – Added PS
PS I was rereading this, and noticed that  all those 20 hits were W_fict_prose. I clicked on that to find out what it meant, and was reminded that I should have warned you: BNC's links refer to my session yesterday, and are no good. I visited again today and found that they are doubly no good, because they don't tell you what W_fict_prose is.

<autobiographical_note time_span="1971-1974" theme="CU_Footlights">
I'm reminded of a sketch I wrote with Martin Gayford, now an art critic (author of Man with a Blue Scarf ... inter alia) whose literary reputation will surely survive this revelation about his juvenilia. The sketch involved a customer talking to a mechanic; but the subject of the repair was a badly-worn edition of Shakespeare: 'The cauliflower of mercy is not strained... Dear oh lor', how long is it since you had this serviced?' – sort of thing. Anyway, one line was 'I'll have to refer the footnotes, and that could take weeks.'
<autobiographical_note>


The point of this digression (it did have one) is that  the only way to find out what W_fict_prose is is to read the BNC help (which isn't top of my list of priorities).

Freebies (Teaching resources: over 36,100 views  and nearly 5,000 downloads to date**. They're very eclectic - mostly EFL and MFL, but one of the most popular is from KS4 History, dating from my PGCE, with 1821 views/844 downloads to date. So it's worth having a browse.)