Last month, in my first anniversary posting I wrote this (about visits to this blog):


Birthday posts often include reams of statistics, but I'm afraid the schedule doesn't allow me to collect them. So here's just one: in the first 3 months of the blog (roughly BPS [Before Publication of the Schedule]) the site had under 1,900 visits – about 600 a month. In the 9 months since, the site had 6,700 – about 750 a month. This isn't a huge improvement (I reckon something like 25%), but given that it's been achieved in spite of (or because of?) less regular posts, and more work on #WVGTbook it's quite satisfying

Now that the dust surrounding the ELTons deadline has settled† (I submitted it on the 21st, and dealt with a rather disturbing query first thing on the 22nd [they couldn't download it from the Kindle Store] and was told that afternoon that everything was OK [ or "παντα καλωϚ εχει", which I gather is Classical Greek for 'Everything's hunky dory']), I can look more carefully at the HD stats. 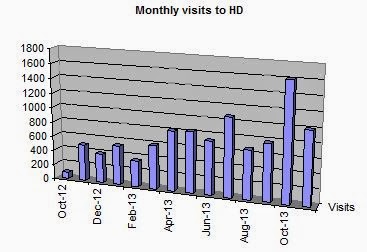 
Mammon (When Vowels Get Together V5.2: Collection of Kindle word-lists grouping different pronunciations of vowel-pairs. Now complete (that is, it covers all vowel pairs –  but there's still stuff to be done with it; an index, perhaps...?)

Email ThisBlogThis!Share to TwitterShare to FacebookShare to Pinterest
Labels: ELTons, Harmless Drudgery, When Vowels Get Together - progress