(And apologies for using apologia as if it meant 'apologies'. When Newman used it for Apologia pro Vita Sua it meant something more like explanation or justication or vindication – a word that reminds me of Borges' 'Biblioteca de Babél', where people search ceaselessly for the possible book that is a Vindicación of their own life. But I digress. In other news, to quote a recent tweet, bears shit in the woods.)

Loyal followers of #WVGTbook will have downloaded earlier versions. V2.0, which I released last April, is the only one that has been reviewed. When I published V3.0 (or maybe V2.1... the details aren't significant) I made it a new title, and the same for future work-in-progress releases.

In the first 3 days of the free promotional period there were fewer than 50 downloads (in comparsion with well over 100 for V1.0 (probably more  – I hadn't learned by then to drive Amazon's reports, and was only counting downloads from one site [120 from amazon.com]). I put this down to dwindling interest (hard to credit, but not beyond the bounds of possibility).

But a message from my sister in Florida put me wise to my error. She said Amazon wouldn't let her download the new book because she had already downloaded it last April. This suggests that the 50-odd downloads so far are from new readers, and that old lags are rewarded – like many bank customers – with an official 'Available for new accounts only'.

O me miserum! (or as Steinbeck's Lenny said 'I did a wrong thing, George').

I don't know how to fix this. But in my many years in the world of software engineering (but as a dilettante, or 'technical writer') I've often been helped by engineers fixing problems I had with intractable (not to say pig-headed) computers. The fixes often involved doing things differently (or 'exercising an alternate code-path', as I learnt not to say). There's more than one way to skin a cat, and some code-paths may involve the computer forgetting V2.0; with any luck, you can exploit a hitherto undiscovered bug. (And there's a juicy digression... no).


Try these, and if I don't get a quick increase in downloads I'll resubmit (in which case the reviews will be lost to posterity). 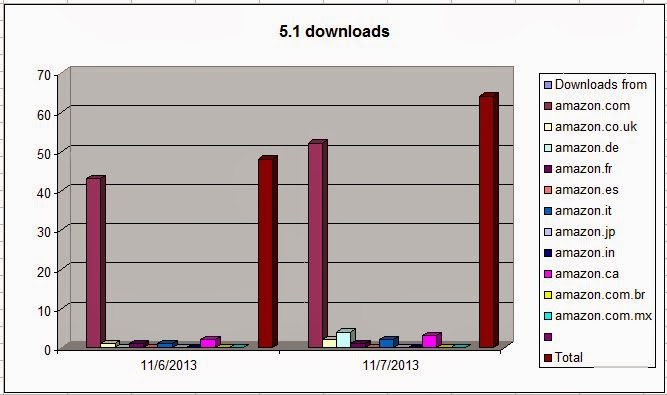 'Nuff said. (Well, too much if I'm honest. All hell is about to break loose, courtesy of SSE: 'planned outage'. Which, as a friend once said, is American for outrage.)
PPS
OK, a bit of analysis for the ones that like words. The glitch I was trying to address (not being able to download) affected my sister in Florida but not my son in  Leeds. From this I reckon that downloads from the  .com site may be more significant than others.

But, even assuming my guess about the significance of the .com server is wrong, the total figures are persuasive enough: V5.0. <60 in 5 days versus V5.1 >60 in 2 days.

I rest my keyboard.

Update 2014.05.06.20:55 – Added STOP PRESS (to the list of possible fixes)
Mammon When Vowels Get Together V5.2: Collection of Kindle word-lists grouping different pronunciations of vowel-pairs. Now complete (that is, it covers all vowel pairs –  but there's still stuff to be done with it; an index, perhaps...?)

And here it is: Digraphs and Diphthongs . The (partial) index has an entry for each vowel pair that can represent each monophthong phoneme. For example AE, EA and EE are by far the most common, but there are eight other possibilities. The index uses colour to give an idea of how common a spelling is, ranging from bright red to represent the most common to pale olive green to represent the least common.

Freebies (Teaching resources: over 40.700 views  and nearly 5,700 downloads to date**. They're very eclectic - mostly EFL and MFL, but one of the most popular is from KS4 History, dating from my PGCE, with nearly 2,1
00 views and nearly 1,000 downloads to date. So it's worth having a browse.)

Email ThisBlogThis!Share to TwitterShare to FacebookShare to Pinterest
Labels: #eltchat, #mfltwitterati, Borges, When Vowels Get Together - progress