A recent blog  on the derivation of brave caught my attention about ten days ago, but I was too busy with the ELTons submission at the time to do it justice. I just made a few notes, and – for unaccountable reasons [temporary insanity?] – gave it the title Schottland the Brave. Perhaps  I was conflating three ideas: the song, the germanness of the point of view, and the ruggedness of Scotland's coastline (reminiscent in some ways of the Costa Brava, so called for its ruggedness).

<digression theme="germaneness(sic)">
That's germanness. But while we're in Spain, I'm reminded of various Romance words for brother. In Italy (fratello), French (frère) (and I'm sure many others, which I can't recall off-hand) they used the Latin FRATRE(M) [and you really should recognize this convention by now; if you don't, have a look here]. But in the Iberian peninsula, this wasn't enough. As I remember (but don't have chapter and verse) according to one estimate there was a time when it was said that 1 in 3 adult males were in holy orders of some kindPPPS; for this sort of 'brother' they used Spanish fray, Portuguese frade, Catalan frare.... A brother by blood, or a germane brother became in Spanish hermano, in Portuguese irmão, in Catalan   germã  .... As we've seen before (here again) an adjective in a Noun Phrase often comes to be a noun.
</digression>

Anyway, the title, whatever it means, has sentimental value for me now, so I'm sticking with it.

One of the blog's points is this:


The problems facing Romance etymologists are, in principle, not different from those familiar to students of Germanic, except that the Romance languages go back to Latin, while Proto-Germanic is a reconstructed language. Yet hundreds of words in French, Spanish, Portuguese, and other Romance languages, including even Italian, either do not have indisputable Latin sources or are not traceable to any Latin roots, so that their early history is as hard to find out as the history of many English, Dutch, German, and Scandinavian words.
More here

It goes on to say this:


The main handicap in connecting brave and barbarus is phonetics. Barbarus had to become brabarus by metathesis (ar to ra) and lose part of its middle or to turn some other somersaults in order to produce the form bravus (b to v after a vowel is “regular,” lautgesätzlich, to use the German term).
More here

At the first mention of Romance Philologists I bridled – unnecessarily. I expected a slight where there wasn't one. What there was though was a MISAPPREHENSION. Read that 'The problems ...' sentence again, especially the 'Romance Languages go back to Latin' bit. We Romance Philologists are different from philologists who use words like  lautgesätzlich, because we're not dealing with a reconstructed language. Oh yes we are: the spoken form of Latin, sometimes called 'Vulgar Latin'. The reconstructed words are distinguished by a preposed asterisk: eg. ‡ '*PARABOLARE, to talk'.

This was a mistake I made when I was writing my first 'Vulgar Latin and Romance Philology' essay (my main source for which was a Que Sais-je? book called Le Latin Vulgaire, the author of which, in response to the question in the series title, should have answered Pas Trop (I think my late lamented supervisor Joe Cremona made this quip, but it may be all my own work – in which case I'm on my own against Joseph Herman , author of  Le latin vulgaire). Vulgar Latin was not a stage. It is reconstructed from sources contemporary with the writers of the oldest Classical Latin texts. Inscriptions and graffiti from Pompeii are a major source. For example, a ring was found there, as reported here. "Dominus suae1 ancillae" was the inscription, reported the Daily Telegraph. Well here's the ring (or one very like it): 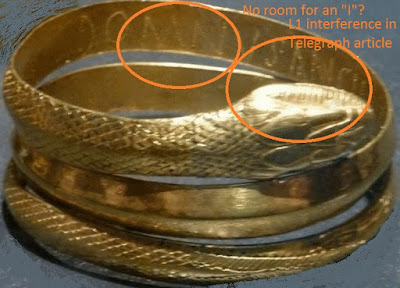 Not 'Dominus', domnus. And no-one could presumably suggest that there was not room, in a 10-15† cm spiral ring, for one little I, or that this one-stroke character was too complex for an otherwise impeccable craftsman! No, people were dropping the unstressed I in speech; and this accounts for words like the Italian Donna and Spanish Doña when the  Latin was Domina . (I changed the sex of the lordly person, because in the masculine the attrition of an unstressed vowel has gone one step further in Spanish – Don [which dropped its unstressed vowel].)

Now we come to the metathesis 'problem' reported in that blog. I have blogged elsewhere about metathesis. It's not a problem ('handicap' is the word the blog uses: 'The main handicap in connecting brave and barbarus is phonetics. Barbarus had to become brabarus by metathesis (ar to ra) '). Metathesis is as common as muck. It's how a widwe becomes a widow and a bridde becomes a bird, and how (as I showed in that blog) Spanish grinalda is related to French guirlande:

Consider the French guirlande and the Spanish grinalda. We can ignore the u, as it just keeps the g hard.

So we've got French

The beginning and the end are the same, but four of the middle five phonemes are in different positions, and the only 'stable' one changes in quality (it's nasalized [in French, because the consonant that follows it has changed - clarification for blog]). In language development, phonemes jump about.
More here


Back at my Vulgar Latin example, as we're talking about the 'handicap' of believing that ar can become ra (or vice versa, in this case) the unattested [*]PARABOLARE gives us parler,  parlare,  hablar,  falar....

But 'Show me the proof' says the cynic. ''[*]PARABOLARE is unattested'. Sheesh

! Nobody's ever seen a quark. That doesn't mean they don't exist. If you don't understand something, don't just pooh-pooh it. Read a book FFS!

We have (at least – I haven't given  it much thought) four reasons for knowing with confidence that PARABOLARE existed:
Anyway. Gotta go. Because of the relief of submitting my ELTons entry (which I have done) I've spent too long on this.

† I was crediting the poor serving girl with pretty pudgy fingers. 3 [because there are three coils] x π x the diameter of a woman's finger = about 10-15 cm.

‡ Well, I did say 'e.g.'.  I've checked, and as it happens PARABOLARE is attested; but the example, as an example, is OK. If  PARABOLARE were unattested, it would have an asterisk preposed. I've removed or bracketed the others; the argument still works, but it's not as neat as I would like. (I'm sure I saw that asterisk somewhere.) Even if PARABOLARE didn't exist, we could work out that something like it must have.

Update 2013.12.14.18:30: Added the PS
PS
Incidentally. it was the inscription on this ring that alerted me to the derivation of the English word ancillary and made sure that I'd never again confuse it either in meaning or in spelling with auxiliary.

PPS
1They obviously gave this job to a cub reporter who had neither studied Latin nor looked at the picture. The 'suae' comes after the 'ancillae'. It's very easy to mistranscribe a foreign language by rearranging the words to fit a more familiar pattern, (because of the phenomenon known to language teachers as L1 interference).

PPPS I have long felt, in a Wikipaediesque sort of way, that this needs further citation. I don't have it from a book, as I heard it from the mouth of Professor E. M. Wilson, dedicatee of the snappily-titled...


<digression>
This compound escapes my hostility to "titled" in a literary context, expressed in the rant here.
</digression>

and author of the Calderón chapter in the standard work on Golden Age Drama. In  fact, now I think of it, his influence may have been behind the CU Hispanic Society's choice of the play that marked my only outing as a tragedian, mentioned  here. Anyway,  whether the statistic (1 in 3 men in Holy Orders) was from his own (or one of his students') research or that of some other scholar, he regarded as authoritative – good enough for me.