OU, you ARE awful

<rant flame="vigorous">
I was recently gulled into switching to M&SEnergy; it would 'fix' energy prices until some date in the future. It doesn't. It fixes the unit cost for consumption. So if they want to raise prices they just load it onto the Standing Charge. Grrr. 'My bad'  though; I should have read the small print.

I also went for paperless billing, online management, all that good stuff. But I had trouble submitting a reading. so I pressed the button for an online chat. And this appeared:


BUGRIT! Wrong computer. And don't talk to me about Dropbox, purveyors of flakey bloatware to the crowned houses of Europe.

Anyway, long story short, their software is incredibly picky about versions of browser software and combinations thereof with operating systems. The message was a museum exhibit, talking about Vista and Netscape. The latest version of IE it supported (not that I normally use it, but it's my first port of call when meeting ridiculous compatibility issues) was V3!†

<autobiographical_note
Internet Explorer V3, that takes me back to the time in – when was it?... the 90s? – when I was using Netscape Navigagor V2.? and I went over to the Dark Side because IE beat NN to including rudimentary CSS support. But I digress...
</autobiographical_note>

I'll have to phone. And that's Monday morning wiped out. Hmmph.

And the upshot I suppose will be that I can't manage my account online because of their feebleware.
</rant> 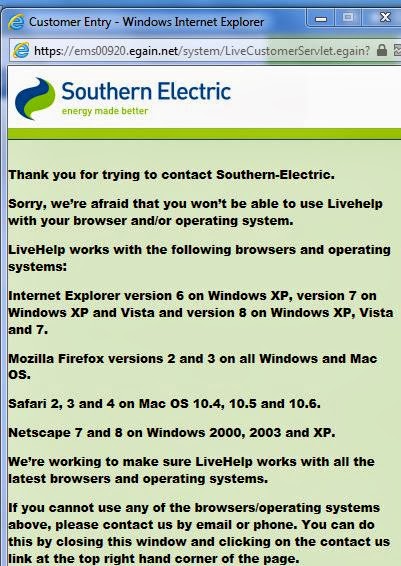 †I was wrong about IE V3 . Still, it's pretty picky. And people who advertise online account management should support it.