Head in the clouds

This morning on Start the Week Farida Vis was bemoaning the tendency for money-grubbing algorithms to be hidden behind infantile vocabulary: she gave 'the Cloud' as a prime example. 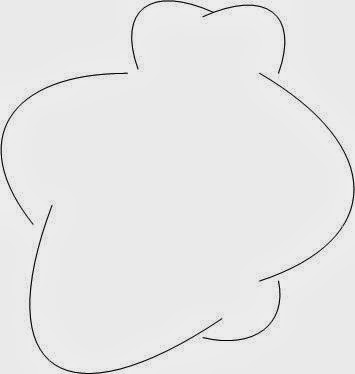 A little history: long before the World Wide Web, even before the birth of the Internet or its DARPAnet forerunner (invented by the Department of Defense as a means of guaranteeing military communications against a nuclear strike† – taking out a single point of failure)...where was I?... long before all that, network diagrams used a conventional symbol to convey the meaning 'there is a connection here from anywhere to anywhere, and the details don't matter'. That symbol was an infantile cloud (a puffy cumulus job, built up of lots of loosely interconnected arcs, and infantile because that's the level of draughtsmanship of most computer engineers): like this –

Infantile, see? In fact, in practice (writing,as I do, from the point of view of a long-time technical writer in the field of Networks and Communications), writers find the one of their number who can draw a convincing cloud and clone that.

) arose, The Cloud was an obvious and convenient metaphor; so obvious and convenient, in fact, that the concept probably didn't need to be explained (among the software engineers who developed it). Nothing to do with devious plutocrats conspiring in smoke-filled rooms. No Mr Big asking his minions 'What childish allegory can we use to mislead Joe Public into entrusting their data to us?'

What is misleading (but more by accident than by design) is that The Cloud, being a warehouse full of servers and wires, is a single point of vulnerability (which is just what those DoD engineers were trying to avoid).

(I'd add a few links to justify the above, but time (and M&SEnergy in particular

V4.0 is nearly done. In fact it would be even more nearly done if not for a minor disaster last Friday. I only lost a couple of hours work though. So later this week it will be available.
[old hat – see new footer]
b

†This radio clip suggests that the truth is not so simple. Well, the story is complex: in the end, the computer network that became the Internet was not developed so as to survive a nuclear attack (specifically), but the ultimate design incorporated some elements that did have this aim – at least, the politicians who voted the necessary funding certainly had that intention. (Of course, a cynic might suggest that research proposals are a load of hooey anyway.


<rant status="on the drawing board">

I'm rather sick of people who go around saying they're exploding myths who have no idea what they're saying. A myth conveys a truth; many users of the word seem to think that it means the opposite:* 'MYTH ⇒ UNTRUE'. They're wrong.


I'll develop this rant in the fullness of time.

I'm thiinking about doing a native iBook version in due course, but for now Mac users can use Kindle's own (free) simulator.

Freebies (Teaching resources:  nearly 45,500 views  and very nearly 6,100 downloads to date**. They're very eclectic - mostly EFL and MFL, but one of the most popular is from KS4 History, dating from my PGCE, with over 2,300 views and nearly 1,000 downloads to date. So it's worth having a browse.)

Email ThisBlogThis!Share to TwitterShare to FacebookShare to Pinterest
Labels: autobiography, Metaphors, When Vowels Get Together - progress, Word history