Sleep faster, we need the beds!

I'm told that this is a Yiddish saying, and my informant had ethnic authority, so I have no reason to doubt him – except that  we were compiling copy for a CU Footlights programme at the time; so invention was in the air. (I'd better not say what he called this section of the programme; it might start a race riot.

Anyway, the subject of the first #eltchat on 26 June 2013 recalled this [apocryphal?] note:

There are some things that can't be done quickly, and maybe learning a language is one of these. Teachers can certainly help to make the process quicker, chiefly by facilitating students in taking charge of their own learning – becoming autonomous to use the #eltchat buzzword!


There were. as usual, many strands to the #eltchat, sometimes diverging sometimes converging, sometimes getting hopelessly tangled. One of the more notable breakdowns in communication was this exchange:

But these were the main strands:

The grist for the mill of our discussion was two articles:
(Not much was said about the 2nd of these; I've started a blogpost about it, but it may be a week or two before I get round to finishing it. Keep an eye on this blog; I'll also tweet a pointer.)

Here are a few signposts along the way:

This was probably a typo for '1 word'. 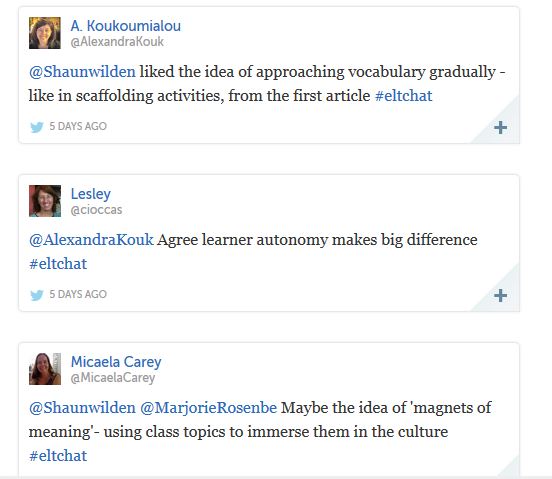 These last two show how learner autonomy and cultural awareness kept turning up during the #eltchat.

These next two show two themes crossing back: 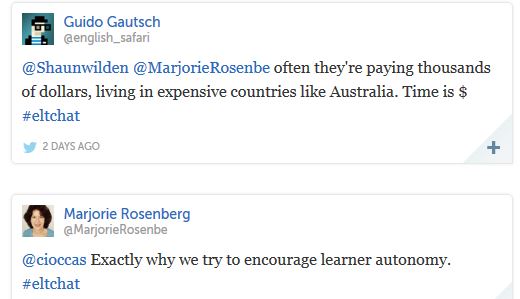 Everyone agreed with this last point; LA not only helped them in the classroom, but also equipped  students who had 'finished' with the skills to continue to improve. LA was felt to be a key to motivation: 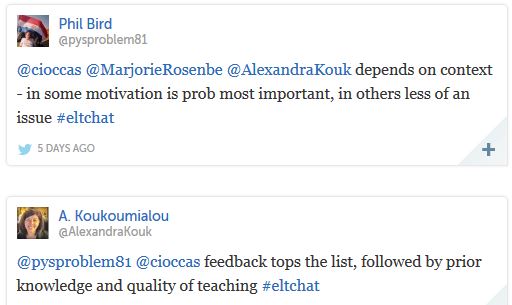 And last but by no means least, food:

On the question of food and culture, I didn't say this at the time – and in any case the example involved teaching another language – but my students (of Portuguese) really enjoyed a festa I arranged at the end of one term. There was Portuguese music, food, and conversation.

There was much discussion of the speed of learning. Here are some pointers to the discussion:

That last one shows another recurrent theme; people were always looking to find lessons they could derive from the observations. Sometimes there were what seemed from the record like dead ends, but they were really things that would take more effort/reflection before bearing fruit. Phil Bird was a lone voice asking if anyone (else?) had thought about 'Hattie's effect sizes'. Nothing came of this question at the time, but in due course I suspect many of us will be thinking about this:

How long it takes

A lot of numbers were batted about, ranging from 5 (a mistake already mentioned) to 20,000. Lesley had to admit to the Australian government's figure:

But don't shoot the messenger, folks; Lesley'd be the first to admit that this was a gross under-estimate (the words 'not', same', and 'ballpark' come to mind).

There were few actual classroom-based ideas, except a general feeling in favour of immersion and surrounding – if not in the culture (the ideal) – then by cultural tokens. Watching TV – preferably undubbed – was mentioned. And Roya mentioned this:

L'Envoi (French for 'send-off' – quite appropriate I think

Shaun closed by telling us that there would be an #eltchat break over the (Northern Hemisphere!) summer, but reminded us that the tag itself wasn't going away.