Meanwhile, back at the -i*- digraphs

Time for a 'sitrep', as they say on NCIS. For readers not conversant with that piece of military jargon, it is a porte-manteau word that conflates the words 'situation report'. The same sort  of conflation happens with other miltary collocations: intelligence derived from intercepted signals is 'sigint', for example.

I have trawled through the IAs making handwritten notes, and will spend the next two weeks doing my HoTMeTaL Pro/Sigil thing (as described here). Then I can look forward (that's the sort of anticipation felt by a schoolboy waiting outside the headmaster's door, rather than the sort felt by the too-excited husband in the Disneyland ad) to 'The Devil's Digraph' ( i.e. '-ie-', of which there are thousands of examples). No, really, thousands. To quote from the work-in-progress version of Introduction to When Vowels Get Together:


When I thought of this principle (excluding whole swathes of words that used a common sound/spelling) I meant it to save time; and it did, for my ELTons entry (which didn't include the idea of percentages).  But now that I do, I'm not so sure. For example, in the AA section (one of the least fruitful pairs of vowels): 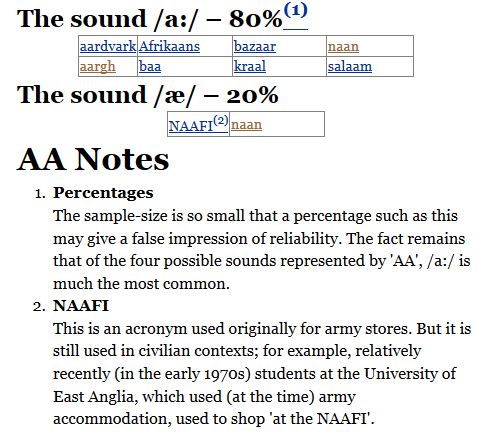 This means that, although I don't include some words in the book, I do have to note their existence in my handwritten notes  – so as to calculate the percentages.

So, when I get into the IEs, I may go into purdah – no doubt a relief for my followers!

Ho hum, back to the grind.

Mammon (When Vowels Get Together V4.0: Collection of Kindle word-lists grouping different pronunciations of vowel-pairs – AA-AU, EA-EU, and  IA-IU, and – new for V4.0 – OA-OU.  If you buy it, contact  @WVGTbook on Twitter and I'll alert you to free downloads of the forthcoming volumes; or click the Following button at the foot of this page.)
And if you have no objection to such promiscuity, Like this.

Email ThisBlogThis!Share to TwitterShare to FacebookShare to Pinterest
Labels: collocations, When Vowels Get Together - progress