The Feedback column in the Times last Saturday ...

...discussed the use of "senior" (as a free-standing noun denoting someone of maturer years (or "somewhat advanced in age" as I was taught to render Chaucer's somdel stape in age...

...  written "ee" and "ea" and "eigh" reminds me of a northern comedian I heard on the radio earlier this week in Act Your Age. The punchline (after a story about a man who wanted a gold statue of his dog) was

Man: No, chewing a bone.

Not a real rib-tickler, but making a point. The joke wouldn't work with RBP.
</meta-digression>

...(I hope you're keeping up with all these  mental ricochets. As a scatter-brained school-friend once said to me: "It's all right for you. You've only got eight hours of this a day. I have to put up with it all the time.")

Here's the beginning of that Times article:

Philip Burt says he objects to the word pensioner. "It's disparaging. We should be referred to as 'seniors'. Much more respectable."
It might be respectable but heaven forbid. My dictionary (Collins Online) confines the use of "senior" as a noun to professional golfers or tennis players who are too old for the main tournaments. It hasn't gained much traction elsewhere unless you're buying cheap cinema tickets.

'... hasn't gained much traction'? Sez who? The writer hadn't even properly read the one work she cited: Collins Online. Granted, the first couple of screensful support her airy dismissal ("heaven forbid" – which incidentally I agree with, while fearing that Mr Burt may feel he has got not only short shrift but also short change), but if you scroll down to where it says American English you will see this: 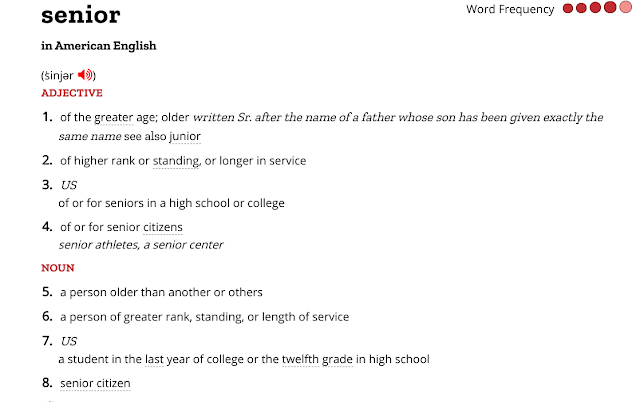 Definition 8 gives the requisite sense. This is confirmed by the American Heritage Dictionary entry: 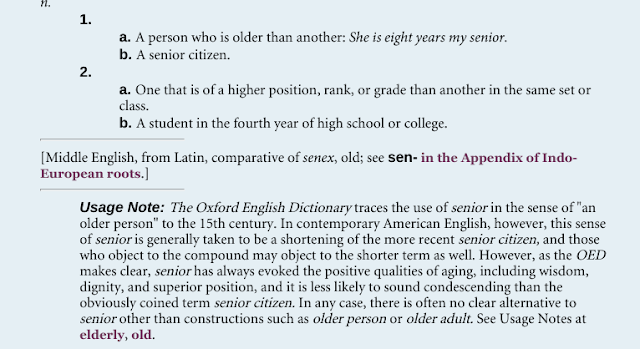 Definition 1b:  is the relevant one; part of the first definition, that's what I call traction. And notice the Usage Note, particularly the second and third sentences. So Mr Burt is simply following the well-trodden path of British English following American English. This is what happened for example with "boyfriend" (which I must have mentioned at least once in this blog – probably more...

...): British English needed a word for an informal relationship somewhere on the friend...fiançé scale, and American English provided the answer: boyfriend.

Returning to that article, Philip Burt's feelings at being so glibly dismissed may  be  mitigated by his satisfaction at having tricked the columnist into repeating his unique use of "respectable": what it means is anyone's guess: respectful? expressive of respect...?

But the otherwise curtly dismissive columnist repeats it, almost as if it meant something,

Enough of this, though. I shouldn't be such a snob [really, though...].

Time for my walk.

<tangent>
which reminds me of an award winning teacher I saw on video, teaching English. He gave lots of examples of what he called "superlatives", with not an -est in sight. I forget the details. Perhaps the AQA  have redefined "superlative", but I  fear this super-teacher was just ignorant. People of his just pre-millennial vintage are sadly ignorant about the nuts and bolts of their own language.
</tangent>

...). Several Latin adjectives have irregular comparatives and superlatives, and English has adopted many of these (such as "major", "junior","senior" [comparatives] and "optimum", "maximum", "minimum" [superlatives]). Less commonly, rather than borrowing the whole word, English forms words by adding bits: "ameliorate" is a case in point,  derived from melior  (whence Fr meilleur, Sp mejor and so on...

<inline-ppps>
Another example of this word-building is "pejorative", for peior (comparative of malus...

<autobiographical-note subj="Quips&quiddities">
(which, irrelevantly, reminds me the Latin jingle I met at school:

...)  the comparative of "good/better/best" (Latin doesn't have a monopoly on irregularity):  bonus/melior/optimus.

<autobiographical-note>
(Which reminds me of one of my favourite Portuguese words. During a summer course in Coimbra I lived in a pensão with a  particularly optimistic {!} young man who, when asked about how he was, always said óptimo – with a beaming smile.)

"Senior" is one of these words, being the comparative form of senex.

But what about the superlative? Well, some would say senissimus, but this is a hotly discussed topic. Here's the nub of the argument:

In this specific instance the question is whether superlatives of senex are really senissim-. The answer from a classical point of view is "not really". The best way to check whether something was actually used is to consult a text corpus. They all have their limitations, but they do give good hints at least. There is only one hit for senissim- ... [HD – the hyphen is needed because there are about a dozen possible endings]

In such cases, when a form is not attested, some grammar books use the term caret  – "it is wanting/absent/missing..."

<serendipitous-potential-footnote subject= "carrot-based puns">
(which, eerily, provides another carrot-based pun to go with yesterday's "18 carat" joke, Shakespeare showed his background in schoolboy Latin puns (NB: no sexism in that "-boy"; in those days schoolgirls were an empty set – let alone ones that studied Latin) in  The Merry Wives of Windsor:  Dr Caius says "The root is caret".)
</serendipitous-potential-footnote.

... So my subject stops short of the superlative.

The other thing I wanted to say was that I've reconsidered Philip Burt's "respectable". In mitigation I blame his channeling of his inner Mr Jingle, eschewing verbs. His "Much more respectable" means, in context, "The  use of the word 'senior' would give people so called an air of much greater respectability."

<rant>
I recognize the literary credibility of verb-less "sentences"; but they don't always express the writer's sense. The fact that Dickens did it is too often an excuse for a lazy writer to say

"Here's a bunch of words in the right sort of ball-park, but I'm too important to fritter away my time saying what they mean. You sort it out. Go ahead, punk, read my  mind."