Irony of ironies. A winner of the Orwell Prize has been defenestrated for her failure to use Newspeak (originally envisaged by Orwell...

"The purpose of Newspeak was not only to provide a medium of expression for the world-view and mental habits proper to the devotees of IngSoc, but to make all other modes of thought impossible. It was intended that when Newspeak had been adopted once and for all and Oldspeak forgotten, a heretical thought -- that is, a thought diverging from the principles of IngSoc -- should be literally unthinkable, at least so far as thought is dependent on words. Its vocabulary was so constructed as to give exact and often very subtle expression  to every meaning that a Party member could properly wish to express..."

Authors must stand up against language police

(itself possibly a nod to Orwell's Thought Police)..., which begins like this:

Yet another of the faithful [sic – a hastily accepted spellcheck for fateful?]...

<autobiographical-note>
I'm paranoid about these: I recently wrote to the editors of CAM about what I thought was a brace of typos:

When, on page 20 of issue 93, I saw reference being made to "racialised [sic] minorities" I assumed that a hastily used spellchecker had been allowed to substitute "racialised" for "radicalised", but when on the next page I saw the reference to a "Pakistiani [sic] boy" it became clear that no spellchecker could have been involved - unless the putative spellchecker incident had already happened in the quoted work (in which case a "sic" would have been helpful). Or perhaps in some horrid hyper-woke world people do  actually use the term "racialised" to mean "taught by a racially isolated environment to discriminate on grounds of race"; I hope not,

I was wrong though. The article had been written by an academic whose language was acutely conscious of the possibility of no-platforming.

Note: The online text in that CAM link has been fixed, so you'll just have to take my word on the "Pakistiani".

...swirls in publishing's "purity spiral" before disappearing down the drain. Kate Clanchy has been censured for offences against ever-more-stringent modern orthodoxy in her memoir about teaching in British state schools, Some Kids I Taught and What They Taught Me, specifically for referring to "chocolate-coloured skin" and "almond-shaped eyes". The book won the Orwell Prize in long-ago 2020, back when our standards of sensitivity were criminally lax.

After a burst of consternation, the author apologised - in today's predatory cultural climate, a sign of weakness and always a mistake. "I am not a good person," she grovelled. "Not a pure person, not a patient person, no one's saviour." Picador, her publisher, also apologised for the "anguish" the book had caused, although the experience of shooting down a prize-winning author is likely to occasion an emotion closer to "glee". The publisher will soon release a new version of the memoir that is cleansed of sin.

"Authors must..."? To judge by her retraction, which smacks of an ISIS hostage video, I'll bet Clanchy fell on her sword (or should that be pen) at the craven instigation of Picador, who no doubt have her sewn up good and tight: "Retract or you're in breach of  contract and we want the advance repaid with interest." The author had to rely on irony to signal her lack of what, in our Catechism classes, we were taught was a condition of the sacrament of Penance: "a firm purpose of amendment".

Returning to the subject of that suspected spellcheck-o. My wild surmise of "some horrid hyper-woke world [where] people do actually use the term 'racialised'" turned out to be a nightmare in the real world rather then a flippant dream in the world of whimsy.

The verb "racialise" is a recent coining, as this Collins trend graph suggests: 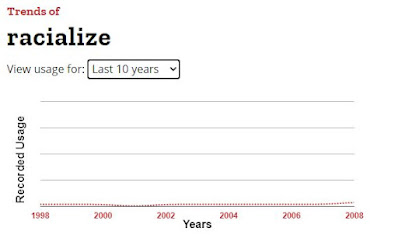 The fact that their data runs out more than a decade ago is a shame, but the trend is clear. The word was scarcely heard of until the end of the twentieth century, but usage rose steeply after that. Assuming a growing steepening of the slope, it has now got a fairly firm foothold. But Collins is the only print dictionary found by Onelook ...

<OK-OK>
Of course, the link is to an online source, but it's backed up by the credibility of  "a proper dictionary". This is the way language progresses in a networked world. Online sources record new usages first, and they are confirmed in print after a decent interval.
</OK-OK>

...in a search for "racialise". and it is only secure enough in its understanding of the meaning to give it seven words (which don't  reflect the politically correct version): 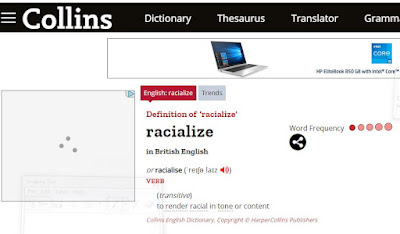 The past participle has a slightly firmer foothold:
Posted by @BobKLite at 13:04