The pun that never was

I went out to dinner last night, just for the halibut [BOU-BOUM - TSH {Ithangyou}].  (except that by the time I publish, it won't be 'last night'. and I didn't have the halibut anyway [it was an outlier at the top of the price list: the chance to resurrect the 'just for the halibut' gag wasn't worth the extra £6.50]). It, last night, that is, was the first night for some months (since the misguided 'Eat out to help out' initiative) when it was possible to eat out inside (which was just as well, in view of the biblical deluge we ran through from the car-park). 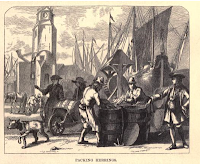 <meta-parenthesis>
And who knew that the red herring (which was a Thing exported to the slave plantations, I've just learnt, as a bottom-of-the-market foodstuff: see here but here's an excerpt, in case you're not interested in the whole sorry tale

From its outset, the role of the Fishery Board was to maintain standards and to intervene in disputes between fishermen.... [F]ishery officers were obliged to inspect the curing of the fish and only correctly cured fish could be sold within Europe. Implicit in this approach was the intention that fish which did not meet the standard could be shipped to the West Indies to feed the slaves. As in the case of cod ‘the West Indies presented growing market for the rejects, for anything that was cheap’. By feeding the slaves, rather than have them growing their own crops, slave-owners could keep them working longer. This trade only flourished until the abolition of slavery ‘since the blacks, in connection with emancipation, acquired the privilege of choosing their own food.’

...) So 19th-century casual racism ('not up to snuff for Europeans, give it to the blacks') has made a crucial contribution to modern-day Caribbean cuisine.
</meta-parenthesis>

... when I was chasing down Monday morning's (Oh yes, it's already Wednesday) anecdote. based on the Vice Presidentthen-elect's "Although I may be the first black* woman..." line, which has finally made sense to me. When I first heard it, it struck me as a non-sequitur; OK, so what's that got to do with the price of fish? But when I heard Nira Chamberlain's story it made sense. Now read on...

..."Being the first is nothing to be proud of, but it's a call [HD This word isn't clear but it's a monosyllable, and the gist is unaffected] to ensure that one is not the last."

So the first/last  trope made famous by Kamala Harris is (I guess) something that parents of girls (especially in racial minorities) say to encourage assertiveness and sisterhood; (and that's not a sexist use of sisterhood, we all need to be sisters).

The other first I was going to mention was live rehearsals of my choir, which were due to restart tomorrow. But the Department for Digital, Culture,Media & Sport changed its guidance for amateur choirs last night...

...having presumably discovered a new variant that can tell the difference between aerosols coming from a professional singer's mouth and those produced by an amateur's:

However, non-professional singing indoors should only take place in a single group of up to 6 people.

So I'm hitting the Publish button and getting on with my entry for the Stephen Spender Prize for Poetry in Translation.

*She didn't say this bit.