I've just come across the word "pinniped" – not for the first time, as I'm a hoarder of obscure words, but it's only now that I have thought about their etymology.

When I first met the related word "pinnate', I thought it referred strictly to compound leaves like this one, but I have recently discovered that botanists use the term pinnate venation to describe basic leaves like the one further down, with a feathery system of veins.

This explains another appearance of the "word-bit" (or morpheme if you're in a linguistics exam) penna- (Latin: =a feather): the English word "pennon".

Another, slightly more obvious derivative, taking the pointiness to extremes, is "pinnacle". 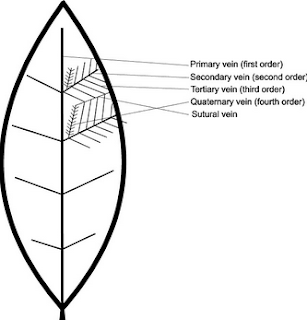 But why stop at Latin? The English "pen" (mightier than the sword, but not because of its pointiness)   is derived ultimately from a Proto Indo European   (PIE) word, as Etymonline says:

<digression type="Further reading","optional">
If you'd like some extra philological speculation,  there's some here about how the stress in the Greek ένκαυστον (ink) shifted forwards to give the Late Latin encaustum, and where the r came from in most Romance words for ink. (Hint: The scholars were writing [the Italian ones at least] in chiostro. [="cloister"])
</digression>

<anachronism-alert>
OK, they probably didn't have the modern sort of pen-knife in medieval monasteries, but that's where those implements – at some later stage – got their name. Gimme a break, dammit: it's a literary device.
</anachronism-alert>

Meanwhile in German a pen is not derived from that PIE root: it is a Füller, which says Duden , while its primary meaning is fountain pen, can also mean feather; (except that maybe it is derived from that root; "feather"/Feder is [by way of that same Grimm's law that makes English "father" and Latin pater cognate]).

But let's go back to pinnipeds: sea-lions, walruses, and so on – mammals that use pointy limbs in place of feet; and what's the vole doing in my subject line? Well Evelyn Waugh knew a thing or two, and I like to think that – although a vole isn't a pinniped – the idea of a word that combined feather and foot owes something to Waugh's classical education:

Feather-footed through  the plashy fen passes the questing vole
Scoop

But while the sun's out there's some greenery that needs attacking.