Another of the reasons for my absence of late has been my entry to the John Dryden Translation Competition 2020 - 2021 , which is nearly done. I'd give you  a taste here, but rules is rules and

Entries must be the original work of the translator and must not, as a whole or in part, have been previously published or accepted for publication, including web or self-publication...

So I'll content myself with recounting a near miss...

<tangent>
Surely the expression should be "near hit". A miss is as good as a mile, but what I nearly did was hit. Still, ours not to reason why. If I followed every such quandary to its logical conclusion I'd he here all d... Is that the time?
</tangent> 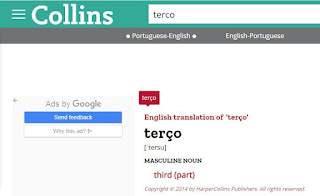 In the piece I'm translating, the leading character's maiden aunt (God-fearing, pious, devout, living in  a house that's more like a chapel than a home) is praying a terço, whatever that is. Dictionaries were no help. Collins, unhelpfully, said :

This was only very slightly better than Google Translate's third (I say "slightly better" because Collins at least rules out the ordinal third.)

I turned to what I should have tried  first – a monolingual dictionary. And among the unhelpful third-related definitions it gave one religious meaning, tierce (one of the offices). Aha, I thought, that's what she was doing – saying tierce.

Smugly I looked in a published translation, to see what they'd made of it: "rosary". Huh, I thought, one up to me.

But a little voice in my head kept saying "But  tierce is a morning office" and morning didn't fit the context (a visit paid after a character had been to work). I hung, Ptolemaically, onto my wrong idea: the character visiting after work was so work-shy (this fitted the background) that he knocked off in mid-morning.

But luckily my "One Holy Catholic and Apostolic" church background rang a warning bell. Why had the published translator plucked "rosary" out of the air? The answer comes from the way a rosary works.. Apart from the few introductory beads, the circle is made up of five groups of ten beads.  Each bead represents a prayer.

But the sayer of the rosary isn't just mouthing (or minding) the words. They are meditating on one of three groups of five Mysteries: the Joyful Mysteries, like "The Finding in the Temple"...

<background>
The occasion when Jesus was being bar-mitzvah'd (or whatever they did in those day  –  anyway he was only 12, according to Luke), his parents left Jerusalem where they'd been celebrating the Passover, Jesus hung about talking High-minded stuff with the elders (as is the wont of 12-year-olds [the getting lost bit, not the high-minded discussion}) and when he was found he came out with a put-down that seemed to me, when I first heard the story, incredibly priggish:

Did you not know that I must be about my father's business?

(That's the Douay version  – the one that springs most readily to the mind of the cradle-Catholic.)

If I'd given my mother that lip when I was 12 I would have expected short shrift (or at least a Hard Stare).  In his defence, the verb (in Jerome's Latin) was in the plural (nesciebatis), so he was being lippy but not necessarily misogynistic; he was replying to Mary though, in the manner typical of stepsons throughout the ages: 'That schmuck isn't my real father.'

Still, it's not fair to hold it against him; the words were probably dreamed up by some unnamed patriarch.  That's the thing about the Bible, it's full of incredible misogyny, racism, manifest bias, and what-have-you, but there's always a justification in the small print.
</reflection>

(separated by twelve years,  both  Joyful Mysteries though. 'The Presentation in the Temple' is notable for being the context of the Nunc Dimittis text. Simeon, who the baby was presented to, had a deal with Yer Man, not to die until he'd held the Messiah in his arms. 'Lord, now lettest thou  thy  servant  depart in peace according to they word' was a kosher way of saying 'OK, you've kept your word, I'm for the bone-yard.'
</parenthesis>

And it's destruction that Pride goes before:

Pride [goeth] before destruction, and an haughty spirit before a fall.

That's all for now; competition admin to do.

The translation has been submitted now. Onwards [and I do mean onwards, Microsoft] and upwards. No rest for the ... <not that bad, really; we're none of us human>. Per ardua ad nauseam.