I read the news today

An OTP (One-Time Passcode) I was sent this morning (partial of course, and I'm not saying what for – you never know what Nigerian princes are lurking out there) started 158... and it took me back to the top deck of a 158 bus in late May 1967. I know it was a 158 (although I could  catch either a 158 or a 114 for the first leg of my journey home from school at the time) because a friend was there ...

<parenthesis>
I've mentioned John before, here back in the days when this blog paid more attention to its byline ["a snapper up of unconsidered trifles"] and recounted chance observations)
</parenthesis>

...and he lived in Ruislip (which wasn't on the 114 route).
John was reading from the sleeve of an album...

<tangent>
Now there's an interesting word – yet another example of a metaphor continuing to refer to an old technology long after the technology has moved on (mentioned  in this blog, too often to mention, like hanging-up a phone or [trivially] giving someone a ring, when most mobiles don't ring anyway).
Latin album  means "white [thing, in this case]", and collectors of various things (stamps, press-cuttings, photos...) used to keep them in a book with blank pages. Meanwhile, back at the gramophone, the old 78 rpm records used to last  only about 3 minutes.  (The length of early popular songs in the recorded music era reflects this...

<autobiographical_note>
And novelty recordings like Danny Kaye's story of The Little Fiddle had to be turned over halfway through. At least, that's what we did until the elder of my two brothers broke it, and had to mend it by sticking thick card to one side. Thereafter, we had to make do with just the second half of the story.
</autobiographical_note>

)...Any longer, and you had to have a number of discs;  for a symphony, say,  there would be a dozen or more). These were sold in ledger-like volumes, containing separate sleeves. This was an "album" as the sleeves were blank. I've always wondered whether the designer of the Beatles White Album knew this. (But maybe it's a well-known item of pop trivia: "let your fingers do the walking" [to use another metaphorical anachronism] if you're interested enough to check.)
</tangent>

... which included full lyrics on it. To quote Wikipedia:

The album's lyrics were printed in full on the back cover, the first time this had been done on a rock LP.

This was important, some say, because it was a "concept" album (though what the alleged concept was isn't clear to me. OK, so there was a band. And then....? [as they say in that telling French question Et alors?]). What's that got to do with the other songs?

Still, it was exciting, and John read the lyrics aloud on that 158 (top deck, of course).

One last observation re "the news today": RIP Dave Prowse. His two chief roles were Darth Vader and The Green Cross man; but I  first remember him as the figurehead of the BullworkerTM advertising. 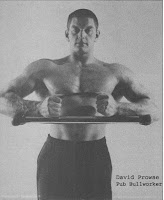 My two brothers and I clubbed together to buy one at the Ideal Home exhibition "special" price of 32s 6d. The older one, who had a job in the Selfridges crockery department (which indirectly caused the Little Fiddle Affair, as he was demonstrating how you could drop a plate without breaking it), paid £1/0/0. The two younger brothers, reflecting our relative amounts of pocket money, contributed 10s. and 2s. 6d.

That's all for this week. I'm missing the cricket.