[Ed: In September 1985] I had my audition for Wokingham Choral Society with their new MD Paul Daniel. I persuaded him to take me on, despite my limitations when it came to reading music (and at the time I didn't even have a keyboard of any kind at home to help with note-bashing) on the strength of my having "recently" sung Beethoven's Mass in C (WCS's concert piece that term) with MagSoc's choir. That recently was something of an exaggeration, but it sounded more persuasive than the more accurate 'about 12 years ago when I was looking for an unauditioned choir having been kicked out of the chapel choir').


<peccadillo>
After three years with that choir (three years that coincided with Paul Daniel's tenure, before he went on to greater things) I left WCS, to return in the early noughties, under Aidan Oliver. On the strength of being a returning member I escaped without audition. (This may have had something to with the maestro's attitude to red tape.)
</peccadillo>

The post the other morning brought the music for next term's offering ...

<parenthesis>
(if that's the mot juste – as there is no offeree, "so shaken as we are, so wan with care" as wossname put it). We'll be having virtual rehearsals. So individual choir members will hear themselves, but there won't be an audience.
</parenthesis>

And the main piece for our Zoom rehearsals was the same mass. So my introduction to SATB choral singing...

<autobiographical_note>
There had been "the sixth form choir", but that was just a (transparent?) ruse to flesh out our UCCA forms ("UCCA" being the fore-runner of UCAS) in the Lower VIth. Our repertoire extended to "Jesu, Joy of Man's Desiring" set for two parts, in Latin  (it was a Catholic school after all) For years this was a party piece for me and my brother.

Before that there had been a primary school choir (back before the philistines rewrote the curriculum), and a Gang Show (from which I can still see the Banda'd ...

<parenthesis>
A Banda was a sort of pre-Xerox duplicating system (Wikipedia calls it a spirit duplicator), involving smudges and a strong whiff of meths. It's a wonder to me that there was not a rash of Banda-sniffing among school children (perhaps there was though; we had a very sheltered childhood)
</parenthesis>

... copies, complete with a baffling typo at the end of "Steamboat Bill". The widow's words addressed to her children should have been "bless each honey lamb"; but our copies said "bless each honey bole" a mistake that my memory can't shake whenever I think of the tune. (We had no idea what a "bole" was at the time, but much of the socio-historic environment was foreign to us anyway: What was a steamboat?, what did "Crêpe on every steamboat" signify? What was a "honey lamb" and did it differ in any meaningful way from a "honey bole"?

... was Beethoven's Mass in C. And I can't wait to hear what our MD makes of the first movement's less than decisive tempo marking. But what do I know? Far from indecisive it might just be extremely persnickety (and if I was feeling stronger I'd've stuck to my guns when the Autocorrect monster told me to break that last word up with an S). 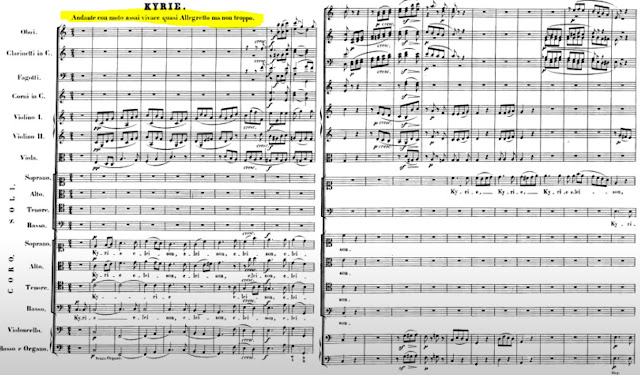 "Andante, but moving on a bit, in fact fairly vivace, come to think of it almost Allegretto. But don't overdo it."

The other piece is Brahms' Schicksalslied – a piece that's new to me. But one critic is quoted ...

...as saying "Had Brahms never written anything but this one work, it would alone have sufficed to rank him with the best masters."

That's all for now.