Who's who in that setting?

Among the many things that a composer needs to think about when setting a text is the internal clues about who's singing what. If they get it wrong it may involve the audience and/or performers in some unnecessary mental gymnastics.

One example is That Lovely Weekend, which once  was a regular part of the repertoire for BYC's male-voice sub-choir. It starts "I haven't said Thanks for that lovely weekend" and the song recounts the two young lovers' doings on the weekend in question, followed by a tearful parting: "I'm sorry I cried, I just felt that way".

This was a song made popular by Vera Lynn in 1942 . It was a wartime song. The lovely weekend in question was – to use the British English – leave (short for 'leave of absence'); the American English equivalent would be furlough...

<parenthesis>
(a word that has a less recreational sense in British English in 2020...

<amuse-cervelle>
What English word is spelt with these consonants in this  order: CRNVRS and includes these vowels (in another order): OOAIU, but has nothing to do with respiratory infection?
</amuse-cervelle>

...If the usage trends graph provided by Collins extended beyond 2008 it might show an upturn starting in March 2020 rather than this faintly embarrassing ...

(not that any document can ever be up to date – I just feel that with data at least 12 years out of date [and counting], they ought to 'fess up) 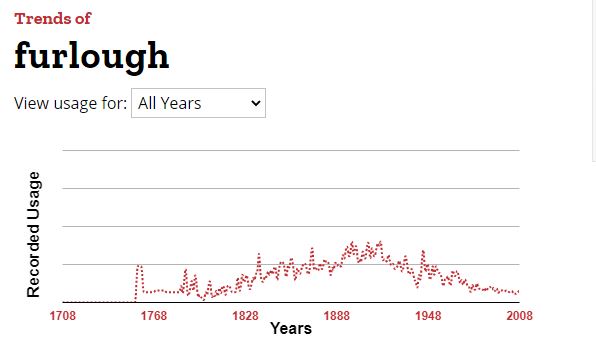 .... But in the setting that used to be in the repertoire of the Berkshire Youth Choir in the early noughties it featured a baritone and only male voices. Of course, the tearful man might have been a conscientious objector being visited by a Wren whose "kit to be packed" (lyrics courtesy of genius.com) included an evening dress, but – expecting (at the sound of galloping hooves) horses rather than zebras – I found it rather odd.
Similarly, but with the full forces of an SATB choir, I felt the version of "Goodnight Sweetheart" performed two or three times by Wokingham Choral Society under our one-time MD Alex Chaplin (and more often by the WCS Chamber Choir...

...) was inappropriately set. The socio-historic (rather than musical) setting was an American Graffiti sort of thing: an adolescent couple in a borrowed car outside the young lady's home at the end of a date:

sings the young ma... but no; it's the sopranos. I always felt confused at this stage (not that anyone in the audience would have shared my feeling.

That's all for today; things to do (even if it rains at Southampton :-)).