Four years ago, I wrote (here)


A choral singer knows he's getting on when, as for me this term, the next concert includes three choral pieces all of which he's sung before with another choir or choirs.

Well, in this brave new (lockdown)  world it's happened again. Earlier this month our multi-talented accompanist, Ben,  has taken advantage of this opportunity to use Zoom to hold a series of virtual rehearsals on the last 3 Fridays of July...


<stop-press>
(and the series goes on now, as he's holding further such rehearsals: details here)
</stop-press>

...The first was Parry's I Was Glad, which I've written about more than once (here and here, and possibly elsewhere). This was the first in the series, and I hadn't done any preparatory note-bashing...

<weasel-words reason="He would say that, wouldn't he?">
Ben was at pains to say this wasn't necessary. But we lesser mortals need to do some prep. I thought, having sung the piece many times before, I could busk it; but it's just as well that in Zoom rehearsals no one can hear anything...


<zoom-pun>
Whenever a Zoom host says "I'll mute you all" it strikes me that it's to our mutual [geddit?] benefit that we can't hear each other.
</zoom-pun>

...(except in the final sing-through, when we've got a recording to sing along to).
</weasel-words >

Next up is the dum-dee-dum bit from the Vivaldi Gloria. I've sung this more often than the Parry, but still need to do some note-bashing,  Fortunately it's in F, so I have a good chance of picking out the notes. 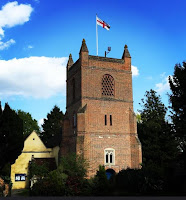 My least prepared rendition of this was towards the end of last century. One of my son's colleagues in Berkshire Youth Choir (and in a barbershop quartet it spawned) was also organist at his local church in Finchampstead. He was organizing a performance of parts of the Gloria.

As I was on taxi-duty that day, and knew the piece well, I became a singing chauffeur.

The last Friday session is the Hallelujah chorus, which will be in most amateur choir members' repertoire. Although I must have sung this more often than any other piece, I will still need to do some preparatory note-bashing. One stretch of repeated "Hallelujahs" always catches me out however often I rehearse it.

The swan-song of Ben's mini-season is also, as happens, a piece I've sung before, as it was one of the pieces featured in a WCS workshop some years ago (10-ish?) held by another Ben. I'm not sure I can make these sessions (and admittedly my enthusiasm for the music is not great), We'll see.

But I must put in an appearance in the land of the living. (Having been away in Norfolk for a week, I felt the need to show that the blog still has a pulse.)