On the road (river?)

This coming weekend representatives of the Wokingham Choral Society (not quite half) will be taking to the road with Songs of Travel and I thought I'd write a word or two about the places we're going.

In the phrase "Taking to the road" though, perhaps river would be better than road, as both our concert venues have names that, at one time, referred to rivers.

...first in Stratford on† Avon, which the University of Nottingham's Key to English Place-names (awarded a TEZZY here).

explains like this:
The first syllable is related to the Modern English "street", the Italian strada and German Strasse. The second syllable is self-explanatory*. The last word is rather unsatisfactorily explained. OK, the origin may be unknown, but it‘s  not just a "River-name"; it means river – at least, Welsh afon means river. And even if the origin is unknown (as the Key says) I think  it‘s reasonable to imagine afon is related in some way (as a single f written in Welsh represents a /v/ sound [which explains the ff in names like "Ffion" – as a written ff is used to represent an /f/ sound]. )

Our second port of call (to use a suitably watery metaphor) is Warwick, which the .Key to English Place-names explains like this: 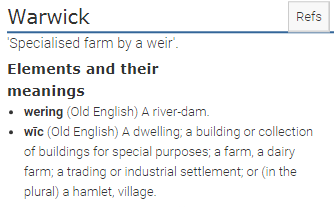 The Key to Place-names output for Warwick.
(Ignore the 'Refs' button in the top right-hand corner
which of course is not live in this screen capture.)

There; told you it was a time-waster. But I have words/notes  to learn, so that's all for now.

* This assertion could do with some support.

While VENĪRE remained everywhere the usual verb for 'to come', two new terms conveying a more visual image were  borrowed from maritime language. ... [HD: The first is well worth looking at,  but not here.]  AD-RIPARE, 'to come to shore', was a somewhat later creation which found favour in Gaul (cf Prov. arribá ).... From Provence it spread to Catalonia, and during the Middle Ages was carried thence to Sardinia, as arribare.

The Romance Language (I've given this source more than once, but make no apology for that: it's very good.)

†The Key goes for plain "on", but elsewhere it is "upon" or "Upon". I noticed this at the time of first writing, and on Saturday afternoon saw that the embroiderers of the kneelers in Holy Trinity Church (in Stratford) preferred "upon".


<COINCIDENCE>
I didn't know when I saw the embroiderer's "upon", but it turns out that the unnamed embroiderer was the godmother of the choir's chairman; so my inclination is to favour "upon" (but I have no principled objection to the minimalist view, if that's what floats your boat).
</COINCIDENCE>