In an early post that dealt with Michael Gove and Nevile Gwynne (guilty of, among other things, Gwynne's Grammar...


<HMMM>
[a  helpfully specific title, that makes it clear that this "Grammar" is not that of any language, but a hotch-potch of shibboleths peculiar to one misguided individual]
</HMMM>

I quoted an Oliver Kamm review of Gwynne's book:


And while we're on that subject, I heartily recommend Oliver Kamm's piece in this Saturday's copy of The Times, in which he calls Gove's guidance 'well-intentioned and largely either futile or destructive' and says of Gwynne's Grammar


It is a work of titanic silliness, and it's alarming that the Education Secretary doesn't see this.

And the phrase "titanic silliness" struck me as an apt title for a reflection on Jacob Rees-Mogg's latest folie de grandeur (or should that be grondeur, to suggest the tone of implied reprimand?)

Mr Rees-Mogg, MP, PC, Esq., <whatever-the-hell-else-he-wants>, in common with many people taking over a new empire (Churchill did, as that post said, Gove did at the Department for Education [see Gove's Golden Rules] among many others; as Dr Johnson said, "Hell is paved with roll-your-own style guides" – or something of the sort).

The BBC summarized his rules thus: 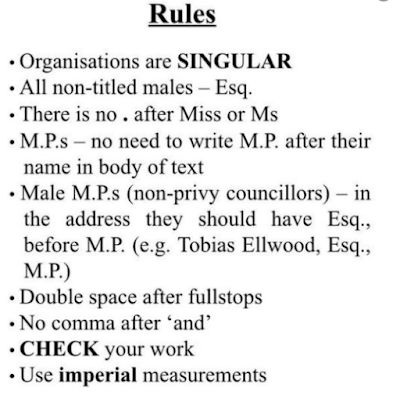 (??? I might be wronging him here, the "summary" is so risible; can he really have written it? It is a shining example of lack of parallelism

And there is a list of words to avoid: 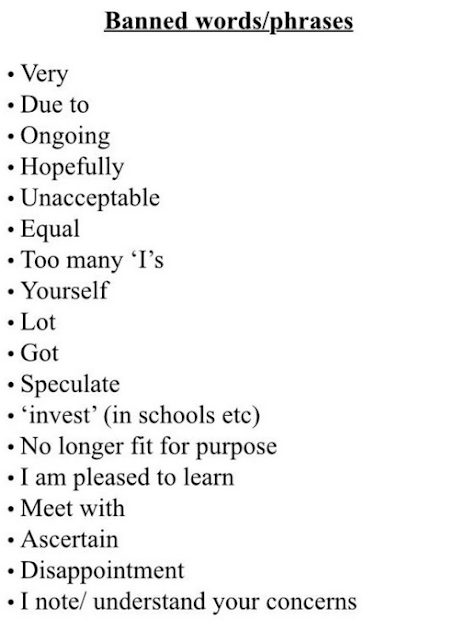 Here he has taken the lazy teacher's easy way out of identifying a word that tends to provoke unwanted behaviour in some cases (eg "yourself" to mean "you", parenthetical "hopefully" to modify a statement ...

<digression>
(in the terminology of Mr Rees-Mogg's beloved Latin grammar it might be called 'the "hopefully" absolute' [which incidentally has an impeccable pedigree, but OK the dude doesn't like it and I understand his conc... ooo-er])
</digression>

... "got" as an all-purpose verb of acquisition, understanding, becoming...


<digression>
(on the analogy of pronoun, I suppose it might be called a pro-verb, but that'd be silly)
</digression>

...   as I was saying, identifying a word that tends to provoke unwanted behaviour in some cases, and banning it completely. I am sure Mr Rees-Mogg would have no principled objection to the assertion that "it is better to travel hopefully than to arrive" but it does have that word. And what's wrong with investing in schools, anyway?

As is always the way when glass-house-dwellers throw stones, they break their own rules:. That BBC  report goes on


This is something Mr Rees-Mogg discovered for himself on Wednesday as he made his despatch box debut in the House of Commons.

In one exchange, he said: "Mr Speaker, we have got perambulators and nannies into this session, which I think must be a first for questions to the Leader of the House."

According to the Guardian, the official transcript of parliamentary proceedings, Hansard, recorded more than 700 instances of Mr Rees-Mogg using one or other of the banned words or phrases.

The man satirizes himself (and he knows it). He is a freakish side-show designed to distract attention from the more insidious chicanery going on in the name of democracy.


<UK_CONTEXT DESTINATION="Hell" CONVEYANCE="Handcart">
In late July the UK suffered what, in the words of the Prime Minister (speaking at the time of Gordon Brown's not dissimilar undemocratic anointment as PM in the unelected wake of Tony Blair), called "a palace coup".

Strictly speaking, there was an election of sorts. Theoretically, the few tens of thousands who voted for a new leader of their party weren't voting for a PM. But they knew what their preference entailed. Less than 1% of the UK population voted for certain economic meltdown.

<JINGLE>
Before the final vote I mused, to the tune of Little Weed's oft-repeated question (see here at 13'08"):

And, as the Little Weed might have said, "It was Boz! – it was Boz!" [I'm sure she'd' approve of the punctuation.]

As in the Bill and Ben case, there was little to choose between  the two; but the eventual winner was the more hell-bent.
</JINGLE>

<CUNNING_PLAN ENGINE="the power of a positive attitude">
If you believe in fairies boys and girls, clap your hands.
</CUNNING_PLAN>

<SCOTTISH_VIEW>
An MP representing the Scottish Nationalist Party (who don't want Brexit, still less the lunatic/cliff-edge/no deal Brexit envisaged by the new PM and his cronies) spoke of him as "the last Prime Minister of the United Kingdom". I knew the nationality of my Scottish grandfather would come in useful.
</SCOTTISH_VIEW>


But the grass won't cut itself. That's all for now.