This tweet led me to a timely Guardian article: 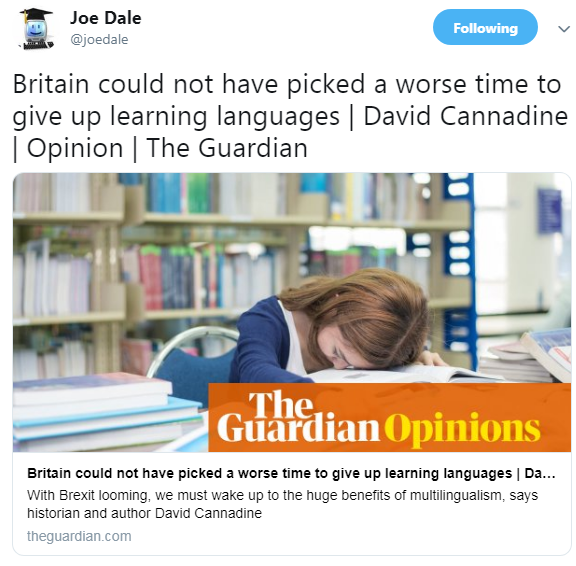 Of course it can't. A post-Brexit exporter won't get very far by talking English slowly and in a loud voice, or by using home-grown machine-translated customer-facing materials such as this:

Over the centuries, we Britons have come to believe that we are naturally proficient – exceptional, even – in certain pursuits. These include engineering, literature, the classics, pop music, geography and football...

But it is instructive, when thinking about the UK and Britishness and what might lie in store for us in the future, to consider the pursuits about which we do not feel so confiden, t. Of these, by far the most significant – and the most worrying – ' other languages.


But another tweet via the same source underlined the short-sighted idiocy of the government's decision to make languages optional after year 9 (or what we used to know as the third year): 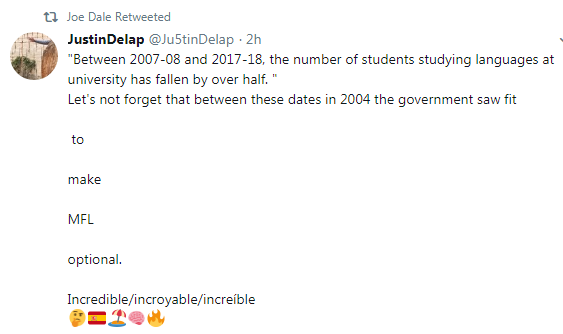 (I'n not  sure how the dates work n this tweet, but the tweeter's heart is in the right place.)

To quote a BBC article published in January 2011:


The requirement for teenagers to take a language at GCSE was ended by the last Labour government in 2004. It led to a massive slump in the numbers taking languages.

Back then it seemed as though some reversal of this obscurantist decision was on the cards.


"Employer demand for French, German and Spanish skills have significantly increased over the last few years.

"The decline in language learning in schools must be reversed, or else the UK will be less competitive globally and young people less prepared for the modern world.

"As well as speaking a foreign language, increasing young people's cultural awareness and their ability to work with people from around the world is just as important."

But I must get on.