That's easy enough for YOU to say

I saw a tweet the other day, which at first struck me as fanciful (or, maybe, even jocular): 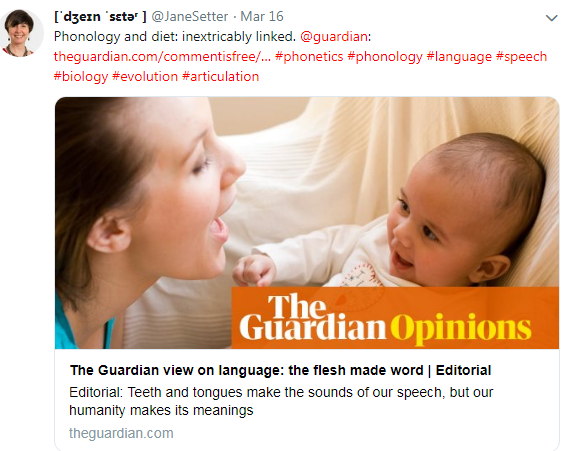 The article starts with a point that I have often made in this blog, but puts it rather better:

Babies have an astonishing talent that adults entirely lose. By the age of one, they can recognise the significant noises in the babble around them and group them into a language. When we have lost this capacity as adults, it becomes enormously difficult to distinguish between sounds that are glaringly different to a native speaker.

But I'm not sure what this has to do with the headline. So I'll quote from the abstract of the  actual research paper (not from the body of the document, which I can't see without spending money or knowing the secret handsh... erm... password.

Human speech manifests itself in spectacular diversity, ranging from ubiquitous sounds such as “m” and “a” to the rare click consonants in some languages of southern Africa. This range is generally thought to have been fixed by biological constraints since at least the emergence of Homo sapiens....
[W]e expect that any change in the human apparatus for production, perception, or learning affects the probability—or even the range—of the sounds that languages have. Paleoanthropological evidence suggests that the production apparatus has undergone a fundamental change of just this kind since the Neolithic. Although humans generally start out with vertical and horizontal overlap in their bite configuration (overbite and overjet, respectively), masticatory exertion in the Paleolithic gave rise to an edge-to-edge bite after adolescence...

Chewing  roots and seeds altered what in phonetics classes we learnt to call "the buccal tract" – the stuff that we use to make vocal sounds: the teeth, palate, lips and so on. The suggestion is


... that this post-Neolithic decline of edge-to-edge bite enabled the innovation and spread of a new class of speech sounds that is now present in nearly half of the world’s languages: labiodentals, produced by positioning the lower lip against the upper teeth, such as in “f” or “v.”

Biomechanical models of the speech apparatus show that labiodentals incur about 30% less muscular effort in the overbite and overjet configuration than in the edge-to-edge bite configuration. This difference is not present in similar articulations that place the upper lip, instead of the teeth, against the lower lip (as in bilabial “m,” “w,” or “p”). Our models also show that the overbite and overjet configuration reduces the incidental tooth/lip distance in bilabial articulations to 24 to 70% of their original values, inviting accidental production of labiodentals.

Interesting stuff. I'm inclined  to believe it, but also to wonder what other coincidental environmental changes affected (and sometimes, perhaps, caused) other phonological differences: why, for example, Hawaiian has 13 phonemes but other languages have several times that (Danish, for example, has 4 times as many, and Lithuanian has even more (two examples taken from this EU document ...


<digression>
Some of these figures look a bit off to me. Does Portuguese have only 9 diphthongs (as claimed in that EU document)? They must be ignoring something – nasals, I suspect. My bible for information about  Continental Portuguese is a typescript, possibly later published by L. W. Keates. He lists 10 oral diphthongs and 4 nasal diphthongs – two of which can be combined to form the triphthongs heard in words such as têm and põem. However you count it, that looks to me like more than 9.


<brazilian_Portuguese status="query">
Maybe, as is so often the case, the authors of that EU document have been led astray by the Internet default position that

which would be ridiculous in a document dealing with languages spoken in Europe. But I know next to nothing about Brazilian Portuguese, so won't speculate further.
</brazilian_Portuguese status="query">

... but still); why click consonants are confined to a handful of South African languages....

Another case of environment moulding language occurs to me, but I have notes and words to learn for next Saturday's concert (mentioned before in this blog, here), so I'll save it for an update.

Another case where environment has affected not phonology but vocabulary is that of Proto-Indo-European. I vaguely remember some research cited by Joe Cremona (see this blog, passim [that's Latin for 'So often that I can't be bothered to check a reference']). The research placed the origins of PIE on the basis of vocabulary. Indo-European langages are spoken today in all kinds of environment, but common words like pond...

...etc. etc. suggest that the language they derive from was spoken originally in a certain kind of environment. Of course, there are hundreds of attested words – and I'm using "attested" there in a loose sense . They are only attested to the extent that they are reliably assumed to have existed, on the basis of relatively modern examples of cognates.  There can, by definition, be no direct attestation of an unrecorded language. But a fellow can dream.

But that's enough navel-gazing for now. :-)


<For_further_research but="not by me">
Proposed study: on a possible relation between the number of phonemes used  in a language and the per capita length of the coastline surrounding its speakers: e.g. Hawaiian versus Danish.
</For_further_research>

Enough I said.
b