Wringing out the old

Another of my occasional State of the Blog posts giving you a chance to see a stat display that is normally reserved for the blogger...


<so_whats_new>
(not unlike all the other stats I've blogged about over the years... But what makes these different is that the others have been the default Overview,  whereas these indicate which posts rank in the top 10 of all time [Year Zero being 2012].)
</so_whats_new> 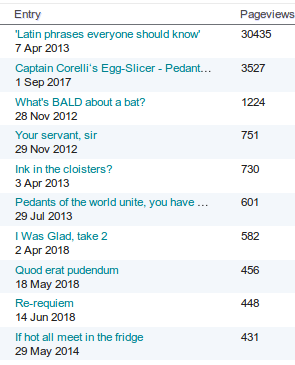 Far and away the most visited, in spite of its age, is one about Latin phrases. It's coming up to six years old, and last time I looked the screen capture it was based on was missing. I've no idea what  makes it nearly nine times as popular as no. 2 on the list. I expect some Influencer has spread the word; maybe it's on a syllabus somewhere perish the thought.

The remaining nine fall into 4 broad groups:
In an update (after the New Year's dust has settled) I'll add some links (though in the meantime you can search using dates (or guessed themes, if you're feeling really adventurous)  :-) But I want to get this out there before December 2018 goes down as The Month of the Solitary Post,