A brace of coincidences

In the week after my choir's Mozart concert (mentioned last time) a pair of Christmas-related coincidences made their presence felt in my life.


The first was triggered by a visit to Reading's St Mary's Butts to buy Christmas cards. 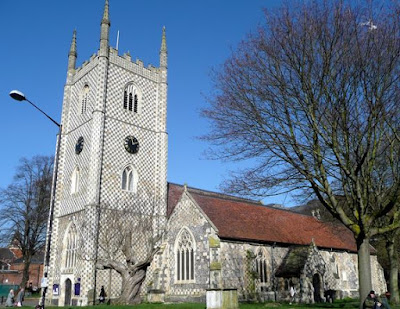 The view of the Minster reminded me of the leaving presentation for my first manager in DEC's Media and Publishing Production and* Design Services in the late 1980s – as she was given a painting of St Mary's (presumably without the streetlamp).

That evening MrsK and I were watching a US crime thriller. A character whose death was a feature of the leading lady's backstory ...


<etymological_aside>
Interesting word, backstory, and a fairly recent coining according to Etymonline  – c. 1990 (about the time of Linda Pavlik's presentation, as it happens [that was my former manager's name – not a common  one in England, but she was from the USA]).
</etymological_aside>

...had thitherto been known only by his first name. But it turned out that his name, too, was Pavlik.

Perhaps I should put some numbers on that "not a common name" I just slipped out. Well, if you plug in Pavlik to the search engine of your choice you will get something like this: 3.23 million, of which a small handful are contributed by UK sites (add .uk to your searchstring and you get only 337 hits). Eastern European immigration to the United States (a 19th century caravan, I suppose you could call it, really a flotilla though) have made the name a common one in the USA.

But it wasn't a frequent visitor to my brain until that visit to St Mary's jogged my memory. And now here was a US crime drama throwing out the same name. Pretty thingish. I thought maybe I could track it down, like so many "coincidences", to some kind of cognitive bias; but I can't find a suitable suspect,

Which brings me to the second coincidence. Later that week was the first rehearsal for our carol service on 15 December (that link will be good until the day after the service, whereafter you will have to click on Past Concerts), and we spent much (if not all – my memory's pretty ropey at short range; 30 years and above is my forte) of it getting our teeth into a setting by Bob Chillcot of the Twelve Days of Christmas. The music was vaguely familiar to me, but not enough to make me stop and think where I'd heard it before, until MrsK called my attention to the composer's note; which starts "This piece was originally written for the Final of Sainsbury's Choir of the Year in 2000...Singers [included]  Berkshire Youth Choir...".

So I heard the world première, as my son was a member of Berkshire Youth Choir at the time.

Time for walkies. Eheu fugaces, as they say (Latin for Phew, we got away with it.)

*The abbreviation was "MPDS" but on reflection I‘m pretty sure the P stood for Production. The old department it replaced was just called PUBS (after the computer that was at the core of the [pre-desktop computing] department), and I imagine one of the main considerations in the naming of the new department was the avoidance of anything that sounded too retro. So 4 letters became 4 words: progress. (Note for the irony-impaired: Hmm?)

Now that the concert's over (and you missed a treat if you weren't there) I can say more about the Chilcott piece (as I didn't want to spoil the musical surprises). BYC sang the main body of the text, with different performers doing a guest spot for each of the 8 iterations of the words 'Five gold rings' ; for example, for the Flower Duet spoof the Opera Babes did the honours.


<background>
The Opera Babes were a 'crossover' duo whose star was rising at the time. As Wikipedia says:


They began busking together in 2001 on London's Covent Garden, where they were first spotted and were signed for their first album by Sony. They became famous for singing "Un bel dì vedremo" ("One fine day we shall see" from the opera Madame Butterfly), the song that ITV used for their World Cup 2002 programmes, at the FA Cup final and at the UEFA Champions League final in Milan.[1] Knight explained the group's strategy to BBC News as follows: "[W]e have tried to maintain the classical integrity while making these things more appealing to a wider audience."[2]

But I  must put in an appearance in the Land of the Living. :-)

Another example of a Five Gold Rings spot: the Kings Singers sang as a barbershop quartet. (In the version my choir sang yesterday [the word yestre'en deserves a revival I think] all the tenors and basses were that quartet).

I've been bothered for  the last few days by an apparent inconsistency in the dates. According to that Wikipedia piece quoted in my PS ,  the Opera Babes "began busking together in 2001". If this date is right they can't have sung in the concert I remember from December 2000. Could Wikipedia have got it wrong???! Could I have g... (Sorry, even the rhetorical question sticks in my craw)???!

But a closer reading of Bob Chilcott's note explains it; Wikipedia's reputation for omniscience is safe. "This piece was originally written for the Final of Sainsbury's Choir of the Year in 2000..." he writes, adding "and subsequently revised for the same event in 2002".  At that time the Opera Babes were well established (and the British Airways advert that used their version of the Flower Duet  was probably current).