The persistence of technology metaphors

On Word of Mouth the other day Michael Rosen and his guests Laura Wright (a semi-permanent guest, addressing all things linguistic) and Rob Eastaway were talking about measurements. At one stage, Laura Wright remarked on the way metaphors tend to persist long after the technology has left them behind. She reached for a low-hanging fruit example (oh yes, we always use that one: the old ones are the best; I've used it more than once in this blog, here for example). Her example was the telephone:


"Everybody in this building has got a mobile...


<philological_aside>
I'm surprised she could resist pointing out how an adjective can often come to be used in place of the noun it qualifies. A peach, for example,  was imported to Roman dinner tables as a mala persica (persian apple). and the adjective became the noun in most Romance languages; read more here.
<philological_aside>

... and yet we will still talk about calling people up, hanging up, the phone ringing off the hook.... We're referring to  technology from the nineteenth century when phones really did hang, when you had to ring a bell to ring somebody – or somebody had to ring it; the operator had to do so...."

This persistence of old metaphors affects nearly every context you can think of:
... There are more examples, for anyone who has the time – further evidence for Guy Deutscher's "reef of dead metaphors" idea, which I mentioned in a very early post (a much-visited one  – coming in third most popular among nearly 400 of these musings)


....Looking out of my rain-streaked window I see clouds - cumulus clouds. Cumulus is Latin for 'little heap' - which is what the cloud looks like. Now after the rain, a house-proud property-holder will go out and sweep the dead leaves on the new patio 'into a little heap' - ad cumulum. The Romans had a word for that - not for sweeping up dead leaves (which I'm afraid is a bit of a personal obsession at the moment), but for collecting stuff together: accumulare - whence our 'accumulate'. Guy Deutscher, in his fascinating The Unfolding Of Language: The Evolution of Mankind`s greatest Invention calls language (in a brilliant metaphor about metaphors - a 'meta-metaphor'?)  'a reef of dead metaphors'. In fact, Deutscher says more; it's not just words that were born phoenix-like from dead metaphors; dead metaphors are 'the alluvium from which grammatical structures emerge'.

But staying with the subject of measurements (the grit at the centre of this ... erm, whatever) someone on  that programme mentioned how memorable measures (resisting metrication) tended to be monosyllabic – foot, inch, yard, and so on. Which brought to mind another such monosyllable –  chain – which was mentioned too. But what wasn't mentioned, on the subject of persistent obsolete technology metaphors, was the surveyor's assistant: chain boy. (The term was current when my brother was one in the 1970s, and a quick Google search confirms that it's still in use [though sometimes, in a diverse workforce, with PC tweezers])*.

And while they were addressing the subject of monosyllabic measures, I was surprised that the seriously francophone Michael Rosen didn't mention the French pouce (which serves dual roles: both "inch" and "thumb"), especially as someone on the programme (possibly Rosen himself...?) did mention the relation between that measurement and the first joint of the thumb.

But time's wingéd chariot is doing its usual trick, so I'll just record for posterity my answer to the Height of Everest in metres problem: Michael Rosen said he knew the height of Everest in feet (29,000 odd) but not in metres. Well, if you don't mind a few approximations it's not that difficult:
Bye for now.

PS
Many years ago I was writing about something entirely inapposite, into which I interpolated this digression:


<digression type="potential">
When was it that boxed sets lost their participial suffix? In my days at OUP we knew what a boxed set was: it was a set of books that had been or were to be (in editorial discussions) boxed. The -ed is assimilated to the....But this is beginning to be more than just potential ...
</digression>

But now the words have taken on a new metaphorical meaning that adds them to the list of metaphors that hark back to an old technology.  Just when I had learnt to suppress the "But where's the D?" reflex, "box set" has taken on a new meaning: "the whole series, available to download or stream". The idea of a physical box has disappeared entirely.

And don't talk to me about podcast. Even the strenuously commercial-free BBC have embraced this word (with its etymological link to the iPod).


<autobiographical_note>
Speaking of which, before the appearance of the iPod I was the proud owner of an iPadq (in the heady days before Apple had monopolized iWords). It was a PDA, before smartphones could do all the requisite personal digital assisting.
</autobiographical_note>

Update: 2019.06.24.17:30 – Typo fix in PS, and clarification in blue.
Update: 2020.09.08.11:20 – Added PPS and footnote
PPS On the subject of the persistence of references to old technology in metaphors, I think I've  just spotted another case hiding in  plain sight. I don't have the time to research this now, so don't present this as gospel. But it seems pretty likely.
In the old candlestick (!) telephones, the user held the upright part (incorporating the microphone) in their less dominant hand (i.e. left, in the majority of cases), and the receiver (with the loud-speaker) in their dominant hand. When technology moved on, and both the microphone and the speaker were in a single unit, it was still called "a receiver" ...

<parenthesis>
This is the bit that needs researching (or, in the argot of the International Organization for Standardization [that's "ISO", not "IOS"] it is For Further Study): in candlestick telephones,  at the time, was the receiver (the part with the speaker) called "the receiver"?
</parenthesis>

...(although it did more than just receive).
I suspect that even this word is on the way out, as many people today eschew land-lines – and a handset is a handset. The Collins English Dictionary shows a slight tapering off in usage – as far as its data extend – and I don't see why this slow dwindling should have slowed in the last 12 years (rather the reverse): 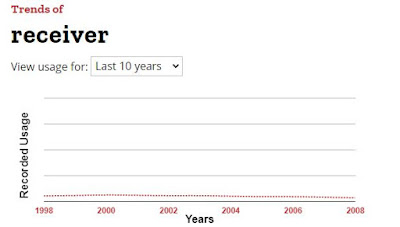 * Another such word is ell, which exemplifies another recurrent feature of language development. Just as the original "For aught I know" was replaced by "For all I know", because "all" is more common than "aught", the original "Give him an inch and he'll take an ell" was superseded by "Give him an inch and he'll take a mile" (slightly improbable; an ell is 1¼ yd  – someone taking 45 times much as is offered is less unlikely [though not all that likely]  than someone taking  63360 times as much. This kind of change (the mile version enjoys 4 times as many hits on Google as the ell version...

<warning reason="double-counting">
Of course, all the ell pages include references to the mile version; that still leaves 3 times as many pages with just the mile version.
</warning>

...) is made more likely if there's a phonological similarity  between the old word and the new one:
Posted by @BobKLite at 13:11