So said the Ottawa Citizen in a feature ironically included  in the "Science" section of that paper nearly 50 years ago (30 November 1981): 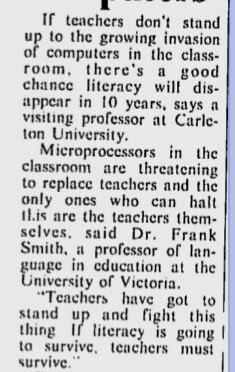 This jeremiad is reminiscent of reactions to many other enabling technologies and newly discovered ways of behaving.

And so on, ad nauseam. Whenever  a development threatens the old way of thinking, obscurantists decry its imagined impact on education.

But this link was posted on Twitter by the Pessimists [no apostrophe, of course – this is Twitter] Archive Podcast, who may not have been entirely at one with its message. And later in the article Dr Smith starts to talk sense:

Trusted. This is a crucial word, that should be noted by the Goves (sic) of Academe. IT, and particularly the World Wide Web,  gives access to a world of realia [that's the language teacher's jargon for actual stuff] – in text, images both still and moving, and sounds).

There is a movement in language teaching that has borrowed the name of the DOGME '95 movement in film,  which Wikipedia describes like this:


Dogme 95 was a filmmaking movement started in 1995 by the Danish directors Lars von Trier and Thomas Vinterberg, who created the "Dogme 95 Manifesto" and the "Vows of Chastity" (Danish: kyskhedsløfter). These were rules to create filmmaking based on the traditional values of story, acting, and theme, and excluding the use of elaborate special effects or technology.


Although Dogme teaching has been seen to be anti-technology,[6] Thornbury maintains that he does not see Dogme as being opposed to technology as such,[14] rather that the approach is critical of using technology that does not enable teaching that is both learner centered and is based upon authentic communication. Indeed, more recent attempts to map Dogme principles on to language learning with web 2.0 tools (under the term "Dogme 2.0") are considered evidence of Dogme being in transition[15] and therefore of being compatible with new technology.

Not everyone agrees with the "compatible with new technology" bit; there are language teachers who insist that the teacher must go "naked into the classroom" (as Nye Bevan so nearly said). But the Wikipedia article on Dogme '95 goes on to say that the movement was "an attempt to take back power for the director". Replace director with teacher, and the arguments about technology become insignificant. What matters, as Dr Smith said in that Ottawa Citizen article, is trust in the practitioner.