My attention to words that include the string *AR* has brought to my attention (not that it was ever totally unfocused, rather that I now have done a bit of relevant browsing  in dictionaries) a word (or group of associated words) that points to an ongoing change in pronunciation. And there is a coincidental surge in that word's frequency of use, starting with Harvey Weinstein  and ending (for the time being, though the boor is always with us) with Damian Green. No prizes for guessing that the mot du jour is  harass.

The dictionary I use for my daily grind (the Sisyphean sonorants book) is the Macmillan English Dictionary  (more by historical accident than for any actual preference). It is happy to recognize two stress patterns for this word, both with British English vowels and with American English vowels:

And the Cambridge English Dictionary is equally accommodating, although it gives only two audio examples: 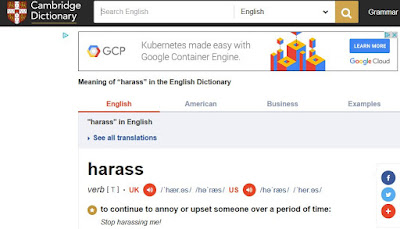 And the two audio snippets are in line with the (mistaken)  view that stress on the second syllable is in some sense American: the "UK" one is is /'hærǝs/; the "US" one is /hǝ'ræs/.

The Oxford Dictionaries site goes one step further, favouring (in its order – which echoes the order that the Cambridge English Dictionary specifies for the US pronunciations) the version with iambic stress (dit-dah): 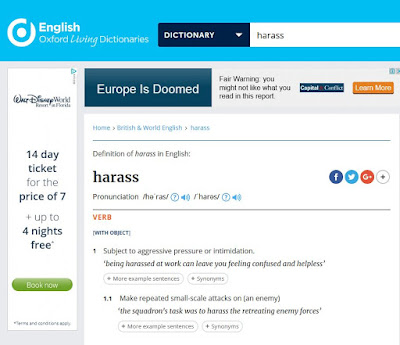 On the page that calls up a specifically US definition, the same site points to the move: 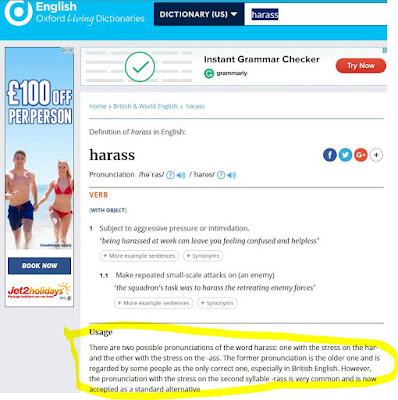 (Note that this is on the American English site: the prejudice against the iambic stress is felt on both sides of the Atlantic.)

I remember a note in a VIth form text book that said that Shakespeare stressed the word aspect iambically.  I imagine this would be confirmed in David Crystal's The Oxford Dictionary of Original Shakespearean Pronunciation.

I wonder if that's the way harass is going (though in reverse: aspect => aspect, but harass => harass).

But we are in the twilight world in the midst of the change, so that in a single TV interview (which I can't track down right now, but which I heard yesterday, honest) the two stresses are both used: Kate Maltby says /'hærǝs/ while Laura Kuenssberg says /hǝ'ræs/.

But in the words of Tom Lehrer, Christmas time is here by golly. Gorra go.

b
PS: Some clues:

PS: The answers: CALL ME ISHMAEL and FLIRTED
Posted by @BobKLite at 16:47