<rant>
This rant has been bubbling away for a few weeks, ever since Priti Patel's "fulsome apology":

As so often after the breaking of an imagined "rule", this was followed by a Twitterstorm. These snapshots give a taste: 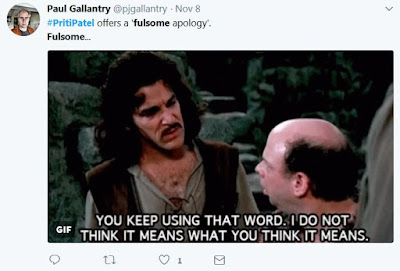 The BBC, to my relief, were a little more measured, allowing themselves a couple of diffident question marks.

(But they still used the loaded phrase "the official definition". For pity's sake, there ISN'T one

In the #WATO programme that examined the issue  Martha Kearney exemplified this well-meaning misprision...


<digression>
"Tee hee hee, doesn't he mean misapprehension?" hoot the monolexicopaths (OK, I did make that one up) "Misprision means 'wrong action, a failure on the part of authority, early 15c.' [Etymonline], and Ms Kearney certainly did nothing wrong." Well I have chosen to use it to mean failure to grasp (which, incidentally, I have just realized, may well underly Wilde's choice of name for Miss Prism).
<digression>

... by saying that "you and I" as an object phrase is "incorrect" (and was quickly slapped down by Oliver Kamm). And Kamm, at  the beginning of the piece, responds to the ubiquitous official definition Shibboleth: "There is no central arbiter of what words mean, they are part of a social contract between the utterer and the hearer or the writer and the reader." Humpty-Dumpty was right (though on the extreme right, where misunderstandings are likely to occur).

One good thing that came out of the kerfuffle was this idea:

The British National Corpus, for what it's worth, records "fulsome apologies" as the 5th most common "fulsome + <noun>"  collocation; COCA has many more, but neither apology nor apologies. I wonder if this suggests that our American cousins are less tolerant of this usage....
</rant>

Enough of the rant . Another thing that came of the Twitterstorm was my thinking more about -some words. Etymonline has this to say:

word-forming element used in making adjectives from nouns or adjectives (and sometimes verbs) and meaning "tending to; causing; to a considerable degree," from Old English -sum, identical with some, from PIE root *sem- (1) "one; as one, together with." Cognate with Old Frisian -sum, German -sam, Old Norse -samr; also related to same.

The relationship between the noun and -some is not predictable (as often happens when words come together: crocodile shoes are made from part of a crocodile, but crocodile tears aren't). And the other thing that leaps out is that  they often hold fossils of words that no longer have a free-standing life in their own right: what is a noi or a win? The Etymoline entries for noisome and winsome explain.

<autobiographical_note>
I put halesome on the end there as I first met this dialect word in a song I sang at primary school:

Halesome is to wholesome as hale (now preserved chiefly in the phrase hale and hearty) is to whole. Health comes into it as well. Healing is making whole.


<digression>
One site I visited to find this song introduces an interesting typo: halesome sarin . Sarin can be called many things, but halesome is not one of them.
</digression>

I'm not sure why Etymonline includes verb as a parenthetical afterthought:  "element used in making adjectives from nouns or adjectives (and sometimes verbs)".

In any case "More or less any noun can be verbed" (as wossname said – Mark Twain?..); so my putting trouble-some among the nouns and worr[y]-some among the verbs is arbitrary.

Again, there are fossils: things don't cumber much nowadays (in fact I wasn't sure at first what part of speech it was). And in the case of buxom, some spelling changes have tried to cover its tracks. The first part of buxom shares its derivation with the bendy sort of bow; and indeed with elbow. It originally meant something like pliable. It would be neat to say that buxom simply means curvaceous, but that would be an oversimplification. To quote Etymonline:


The meaning progressed from "compliant, obliging," through "lively, jolly," "healthily plump, vigorous and attractive," to (in women, and perhaps influenced by lusty) "attractively plump, comely" (1580s). In Johnson [1755] the primary meaning still is "obedient, obsequious." It was used especially of women's figures from at least 1870s...

But enough of this. SOME things are beyond me.

Inspired by Etymonline's 'meaning "tending to; causing; to a considerable degree"' I started to make a Venn diagram showing overlapping shades of meaning (which could be seen as not fitting in with my opening rant –  only the meanings I'm toying with are more in a spirit of description rather than of proescription). But I'm not satisfied with the result: I ended up just chasing words from one category to another (and speculating on the usefulness or otherwise of a three-dimensional Venn diagram). Still, here it is: 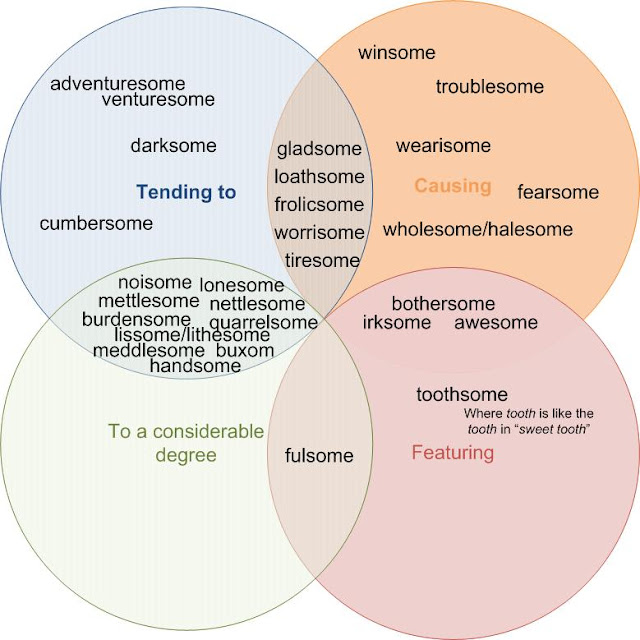 Update: 2017.12.06 – Fixed typo (although proscription and prescription tend to go together in the same minds).