Gregorio Allegri wrote his Miserere for the service of Tenebrae, to be performed in the Sistine Chapel. The service gets its name from the hour when it's sung – twilight – although the music itself is far from TENEBRAL.


<inline_ps>
Incidentally, I wonder whether the service of Tenebrae  was already commonly referred to as "Evensong" before the Reformation. I've just watched a fascinating programme on BBC Four: Lucy Worsley's Elizabeth I's Battle for God's Music, that detailed the invention of the service of Evensong based on John Merbecke's setting of the Book of Common Prayer (that's a gross [and possibly mistaken] over-simplification: it was all very confused).

But at the beginning of the programme (8 minutes in), she reads – and points out in the manuscript – an eye-witness account of the dissolution of the monastery of Evesham in 1539. And in that account the monk uses the term Evensong:

I don't know enough about manuscripts to judge for certain whether  the E is capitalized: the first e of Evensong looks bigger than the second, but smaller than the E of Evesham (in the first hand-written line). It is clearly one word though – which suggests that it was a Thing.
</inline_ps>

There is a story about Mozart and the secretive Vatican rules that kept the music undocumented – protected, one might say, not so much by copyright but by papa-right.

According to the popular story (backed up by family letters), fourteen-year-old Wolfgang Amadeus Mozart was visiting Rome when he first heard the piece during the Wednesday service. Later that day, he wrote it down entirely from memory, returning to the Chapel that Friday to make minor corrections. Less than three months after hearing the song and transcribing it, Mozart had gained fame for the work and was summoned to Rome by Pope Clement XIV, who showered praise on him for his feat of musical genius and awarded him the Chivalric Order of the Golden Spur on July 4, 1770.

Various embellishments have been added;  "At some point, it became forbidden to transcribe the music" as that article puts it; no wonder that page comes with the stern warning/plea: 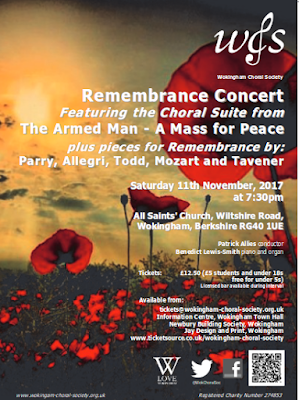 The version I was sold at school was "it had never been written down, but Mozart's version, after a second visit to the Sistine Chapel was note-perfect".

Well... Let me just....hmm..? I'm sure Mozart's piece was wonderful, and his memory remarkably accurate. But, if nobody had written it down, how could anyone judge its accuracy? One could surely rely on the Vatican authorities to claim Mozart‘s version as their own.

I mention this piece because it will form part of our Remembrance Concert in two weeks.

But it is not the mainstay of the concert; that is the choral suite from  Karl Jenkins' The Armed Man, which has most of the good bits from the work originally commissioned (Wikipedia again)


...by the Royal Armouries Museum for the Millennium celebrations, to mark the museum's move from London to Leeds

<digression>
It was there (the Royal Armouries at Leeds) that I started one of my earlier posts. Strange how one keeps stubbing one's toe on these Aha moments.
</digression>

When we sang the whole piece some years ago, the only movement that struck me (apart from the choral suite, that is) was the song that gives the whole piece its name: L'homme armé.

Apart from this there are some lovely reflective pieces by composers  from Mendelssohn to Tavener, with many other gems  along the way.


Give it a go. Hurry, while stocks last.

Less than a week now to our next concert. One of the pieces on the programme that I haven't mentioned yet is In Paradisum from Fauré's Requiem. Some time ago, preparing to sing this piece, I wrote:


In can mean many things in Latin, but when followed by a noun in the accusative it doesn't mean 'in'. If the words were In Paradiso they would mean 'In Paradise'; but they are In Paradisum ... going on ...deducant Angeli : 'Angels will lead you into Paradise...' One of many other meanings of in, this time followed by the dative, is exemplified in the next phrase: in tuo adventu: that's closer to 'in' in meaning, with a sense something like 'on the occasion of', though I'd favour a simpler translation: 'When you arrive...'.

It is a lovely piece that  most people know, even if they can't place it. Knowing Lennon & McCartney's tendency to borrow from "classical" favourites (there are those metaphorical tweezers again – I'm seldom at ease with the phrase "classical music")...


<beatles_factoid>
It has been widely reported that the song Because was inspired by someone in the recording studio playing the easier bit of Moonlight Sonata.
</beatles_factoid>

...it seems to me possible that the introductory bars (of In Paradisum) were at the back of someone's mind when they wrote the harp introduction to "She's Leaving Home".

Anyway, no time for more – I have words to learn for Saturday.

And here are three more clues: