And only man is vile

<apologia_pro_subject_line_sua>
(But the island in question is not Heber's "Ceylon" (isle...vile is the rhyme); it is on Henderson Island that


In vain with lavish kindness

The gifts of God are strown
Source


Besides, that lavish kindness doesn't really work, and I doubt if The Big Fellah would be in a hurry to claim discarded Tizer bottles as part of his bounty.)


But I'm getting off the subject. Ahem...
</apologia_pro_subject_line_sua>


I spotted this sub-head in a Guardian article on Monday.


Henderson Island, part of the Pitcairn group, is covered by 18 tonnes of plastic – the highest density of anthropogenic debris recorded anywhere in the world

Anthropogenic debris. Take a moment to consider that phrase. The article goes on:


The largest of the four islands of the Pitcairn Island group, Henderson Island is a Unesco World Heritage Listed site and one of the few atolls in the world whose ecology has been practically untouched by humans.

The island exhibits remarkable biological diversity given it covers only 3,700 hectares, with 10 endemic species of plant and four land bird species. Its isolation had, until recently, afforded it protection from most human activities...

...The threat to biodiversity posed by plastic debris has come under increased scrutiny as findings reveal the extent of the problem, with millions of tonnes ending up in the ocean every year. 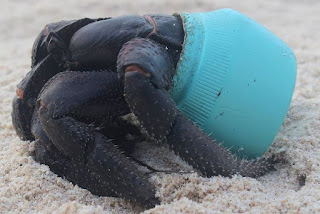 The natural world has put up a brave response  to this assault.  Hermit crabs, for example, have started using bits of this debris to stand in for empty shells. On the face of it, this is a Good Thing – reuse rather than refuse. But a member of a research group working on the island, interviewed for the Guardian article, reported finding


...  hundreds of crabs living in rubbish such as bottle caps and cosmetics jars, and has been told of one living inside a doll’s head.

“From the looks on people’s faces, it was quite grotesque,” she said. “That was how I felt about all these crabs – we are not providing them a home, this is not a benefit to them.

“This plastic is old, it’s brittle, it’s sharp, it’s toxic. It was really quite tragic seeing these gorgeous crabs scuttling about, living in our waste.”

<digression>
By the way, while  we're on the subject of hermit crabs, I recommend this Natural World programme, part of which deals with an  informal house-swapping chain formed by a sequence of different-sized hermit crabs, with the biggest finding a new shell and all the others swapping theirs for the next size up.
</digression>

But a solution could be provided by the natural world. At the end of April 2017 an article in Current Biology reported on Polyethylene bio-degradation by caterpillars of the wax moth Galleria mellonella a title that rather telegraphs the message (and promises a less than inviting overview of the research). I admit that I was more inclined to read about a Caterpillar found to eat shopping bags, suggesting biodegradable solution to plastic pollution in a piece in the University of Cambridge's Research review.

This very hungry caterpillar produces "something that breaks the chemical bond, perhaps in its salivary glands or a symbiotic bacteria in its gut", says Paulo Bombelli, a Cambridge researcher and co-author of the article.


...the degradation rate is extremely fast compared to other recent discoveries, such as bacteria reported last year to biodegrade some plastics at a rate of just 0.13mg a day. Polyethylene takes between 100 and 400 years to degrade in landfill sites.  "If a single enzyme is responsible for this chemical process, its reproduction on a large scale using biotechnological methods should be achievable," said Cambridge's Paolo Bombelli...

...As the molecular details of the process become known, the researchers say it could be used to devise a biotechnological solution on an industrial scale for managing polyethylene waste.

So it looks as if we might not need to go as far as Mars to do our terra-forming. Maybe we can do it on Earth. Hang on though, that doesn't make much sense: TERRA-forming on Earth?  Holy pleonasm, Batman.

PS I imagine Mr (Signor?) Bombelli is one of the overseas students who could do with a guarantee of continued residence. I wish the Brexit preparations would pay more attention to this sort of thing.

Oh yes, and the answer to that clue: BELIEVE.

PPS The blog has gone quiet for a bit, but I’m still here. A recent article has added some background to this story:

We can only hope that Galleria mellonella can stand the cold.

<digression>
A photograph by Dr Waller caught my attention for two reasons, one of which has nothing to do with with pollution – though the use of a pound coin for scale is an intesting multi-layered metaphor (about the link between environmental damage and getting and spending) 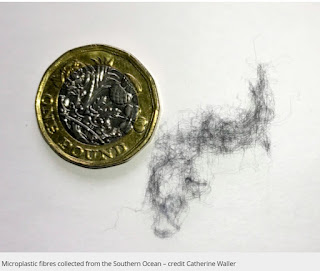 The second, and totally irrelevant reason was that it reminded me of a recent conversation I had with an old (not to say coæval) friend about the similarity between the new coin  and the old threepenny bit – though, when I compare the two, Browning‘s Far brighter than that gaudy melon flower comes to mind.

I can think of no more polyphonic word (to abuse the term in my own Humpty-Dumpty-esque way – I mean pronounced in many different ways). The first syllable could have any of four vowel sounds:
But not, of course /i:/ as in three.

PPPS – Three months after this original post, Scientific American has caught up, with quotes from Spain's Institute of Biomedicine & Biotechnology of Cantabria (a happy echo of Universitas Cantabrigiensis) and the University of Tennessee. I can only imagine that a combination of Trump and Brexit will further slow down the dissemination of news about scientific research – particularly if it has environmental impact.