The price of education

... or rather the cost of its omission.

Some bumf has just plopped onto my doormat  (is any other verb possible, I wonder? – things might thud if they're particularly heavy, but otherwise plop it is)...

Yes; they can fall, drop or land;
and lie or be, of course,
but I was thinking particularly of falling.

... listing donors  to college funds. There is a list showing percentage participation by year of matriculation whatever that is  – presumably percentage of matriculands giving, rather than the percentage (given by each year) of the total given (which, come to think of it, can't be so, as the average for all years since 1942 [before which there are a few odd nonagenarians] is 14%).

It would only be to be expected that there would be a bell curve, with earlier years tailing off and later years rampimg up (as graduates find either their Heavenly  reward or their feet, respectively).  My own year, 1971, does quite well: since then, only two years have exceeded its participation rate, and one has equalled it: 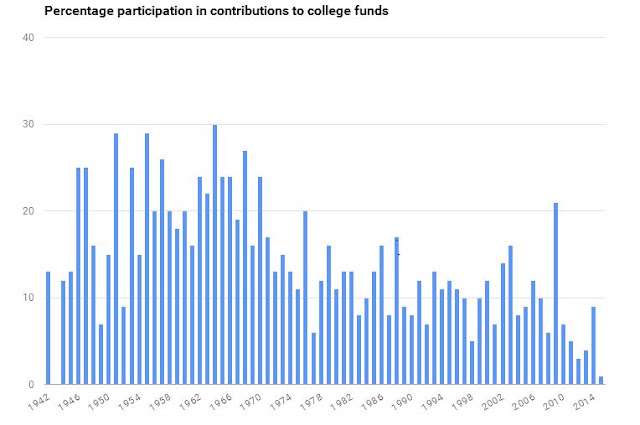 But something happened in 1998 (and I think the Chancellor of the Exchequer knows something about it: tuition fees). Since 1998 the average has fallen to single figures; graduates presumably think Pay more? I should cocoa. You've already had N thousand (where N is typically somewhere between 10 and 100 – at a guess; the NUS probabl;y has more exact figures). And that average is raised by the anomalous 2009, when the reported rate is (dubiously?) more than twice the mean.

Of course, this is a tiny sample, and says nothing  – prima facie – about state funding or its shortfall; but it strikes me, anecdotally, as at least suggestive.


<autobiographical_note theme="Primary School" relevance="tenuous">
In the mid-late '50s I met my father on his return from the 2nd Unit photography for No Time to Die. I remember the BOAC bag he was carrying  at Heathrow, where I met him, but not much else; I had just started school.  The film was released in 1958, so I expect the 2nd Unit work was finished in 1957, or even 1956. At the airport I met and shook hands with Bonar Colleano, reaching up from my height of about 4ft.

The cast and crew list at IMDB credits him as The Pole, which doesn't suggest immense stardom, but I was convinced he was (anachronistically*) a megastar and didn't hesitate to drop his name at school at the earliest opportunity. The first time, there was no sign of recognition. No accounting for the ignorance of SOME people, I thought, and went on to my next name-drop-ee. It took 4 or 5 such attempts for me to get the message that Mr Colleano's was not a name to conjure with.


<afterthought>
Perhaps, I have just thought (with the benefit of hind-sight and Wikipedia), that as many of my schoolfellows were Polish (my father had moved to Ealing because  of the film studios, but Ealing was also a magnet for Poles, because the local church had a "Polish Mass" even in those pre-vernacular-Mass ...


<background>
This is reminiscent of an issue I discussed a while ago here, explaining about the introduction of  the vernacular after the 2nd Ecumenical Council in 1966, but also discussing the inherent foreignness of familiar Church Latin texts spoken with foreign phonemes.
</background>

...days) maybe their parents sheltered their children from this portrayal of The Pole. More likely, though, he was just a bit-part player who nobody had heard of anyway.
</afterthought>

That list also contains the rather enigmatic (APSEUDONYMOUS?) credit

Regular readers may remember Foggies, my award for spectacularly bad writing. As I wrote here


The idea for the name derives from Robert Gunning's FOG index, although these awards don't restrict themselves only to obstacles to readability measured by that index.

It goes to Michael Gove for his review of Timothy Snyder's On Tyranny  in The Times of 25 February 2017. The whole thing is worth a read for its consummate display of self-serving doublethink (hoping to atone for his own craven kowtowing to The-Clown-With-The-Orange-Countenance) and obfuscation. But two notable "sentences" are these:


He compares Trump's behaviour at campaign rallies to the deployment of the SS and brackets Trump's stump speeches with the "shamanistic incantation" [quotes sic, but what does he mean ? Hitler's incantation, or the crowd's, or the crowd saying "Hitler"? – probably Hitler leading the crowd. but in what way is this comparable with deployment?] of Hitler. He also compares Trump's attitude to any opposition to Hitler's approach to critics and feelings of fear on the streets of the US today to totalitarian terror in Nazi Germany in the 1930s.

Phew. Fifty-seven words and but a single resting place for the weary parser. The last thirty-three-word string is a labyrinth of to's (nearly 1 every 7 words ' – sort that lot out). I finally worked out that the first comparison ends at critics, and the second is between the sadly unparallel feelings of fear and totalitarian terror (whatever THAT is); only the 3rd and 4th to are the comparison  sort. Now I'm  not a stickler for "compare... with" as some language Nazis are, but since Gove did use with in the first sentence, switching to to in the second is at best mindless elegant variation and at worst an unforgivable attempt to trip the reader up.


We write with ease to show our breeding
But easy writing's curs't hard reading.

Hmm... That's enough for now. I'd like to see how Gove's writing in this article measures up to his own prescriptions (as Education Minister). But that will have to wait for an update. 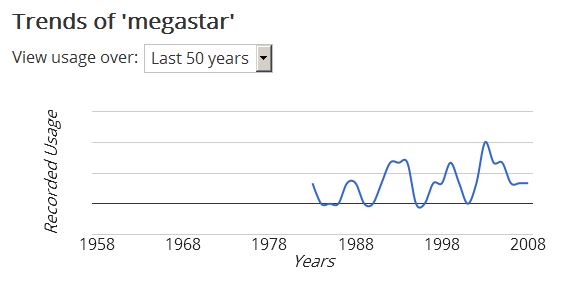