A little over a year ago I wrote,  in defence  of using an INTELLIGIBLE transcription system when writing about pronunciation, I ranted thus:


Excuse my use of IPA symbols...


<rant flame="simmer">
I have ranted about this before, somewhere  in the UsingEnglish forums, but I can't find where. So some readers may get a sense of déjà-lu  – but probably not. (And I did mean -lu.) Anyway, here I go again.

When you know your audience (and that word is crucial  – when people can hear you) it's OK to say things like 'lear sounds like leer'. 'Sounds like' is meaningful only if there's a known sound to compare. But when you're writing – say, in an online forum – it's not so easy. What  if one of your readers has just learnt bear, pear, tear (NOT the lachrymal sort) or wear, so that the /eǝ/ sound is uppermost in their short-term memory of English sounds? You've told them that leer is pronounced  /leǝ/.

Or suppose one of your readers mispronounces law as /lǝʊ/  –  a common enough mistake in an ESOL classroom   –  and you write that a word  'sounds like law'. Again, you've misinformed them. And I don't think that's too strong a word, at  least not in a language-teaching context.  If the teacher wants to communicate something, it's part of the job to make sure it's understood correctly.

People complain about 'having to learn a whole new alphabet'. That's nonsense, particularly in the case of English  – which can be adequately transcribed using the letters of the alphabet (most with 'their own' sound – b ⇨ /b/, k ⇨ /k/, s ⇨ /s/, and so on) with a dozen or so new symbols). The system can be taught in a few lessons, makes dictionaries infinitely more informative, absorbing and rewarding, makes modelling and  correcting sounds easier and clearer, supports increased learner autonomy.... And yet many learners (and even quite a few teachers, to my utter bewilderment – as I can't conceive of learning a new language [except by total immersion] without using the IPA) resist the idea of learning/teaching IPA symbols.

And now the Mail has done it. Not that I'm surprised; I don't know of a more obscurantist publication. But it reminded me of  my ire. Unfortunately I failed to strike while the ire {SIC] was hot, and now the guilty party has covered his traces – a table that showed (?! perhaps show isn't quite the verb I'm looking for) how a word was pronounced in different regions, using a home-grown "system"  of phonetic transcription  based entirely on regular alphabetical characters (revealing, for the linguistically aware, more about the writer's accent than about the speakers').

I find it interesting how much a meaningless document can convey about the writer. A recent tweet alerted me to the latest parliamentary howler (the phrase crying out to Heaven for vengeance comes to mind from a God-fearing background, though I admit that an element of exaggeration may  have crept in there).  It is an opposition motion followed by a  hotch-potch of words masquerading as an "amendment" in the sense codicil that emasculates and sucks the life out of a document: 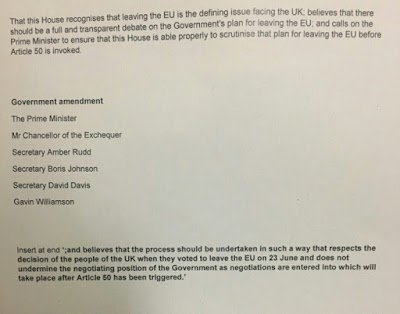 
The lexical density of a text tries to measure the proportion of the content (lexical) words over the total words. Texts with a lower density are more easily understood.

"NO, OF COURSE NOT.
MAKING SENSE IS NOT THE POINT, SILLY.

WE ARE KICKING DUST
IN THE EYES OF THE OPPOSITION" 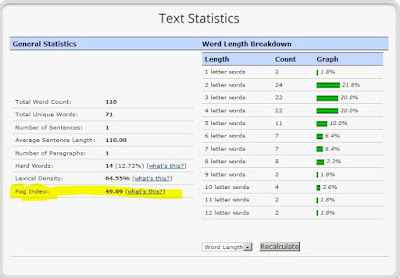 This is no surprise, given that the Fog Index is defined like this:


The Fog Index is a readability test designed to show how easy or difficult a text is to read. It uses the following formula:

Reading Level (Grade) = (Average No. of words in sentences + Percentage of words of three or more syllables) x 0.4

If Fog Index is so closely linked with sentence length, and you double the word count without adding any punctuation...

There's  more to be said about that amendment, but the final  crop of blackberries is waiting to be picked, and fruit crumble doesn't taste the same if your fingers aren't tingling with splinters (whatever's in the freezer. :-)

PS A couple of clues:
Turn winch to have a good chat. (7)
Catchphrase uttered softly and repeatedly: gin, perhaps. (7)

PPS –The answers: CHINWAG, MANTRAP
Posted by @BobKLite at 11:10